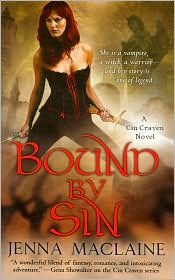 Book Summary:
As the Civil War rages among mortal men, Cin Craven is locked in an epic battle of her own—fighting the renegade vampires whose unquenchable appetites she knows all too well. At her side are the immortal warriors of The Righteous- among them her husband, her lover, her soul-mate Michael. With a passion bordering on possession, Cin’s love for Michael knows no bounds.

But when a ruthless plantation owner kidnaps Cin’s cousin the most terrifying battle of all awaits. Cin is drawn to the irresistible lure of dark magic to stop their enemies, while Michael staunchly opposes it- putting their love and loyalty to the ultimate test.

Giveaway: I have two copies of Bound By Sin up for grabs. One is signed by the author (Thanks Jenna!) and one unsigned copy. To enter leave a comment along with your email address. Open to U.S. & Canada.Winners will be announced on January 31st. Good Luck!!