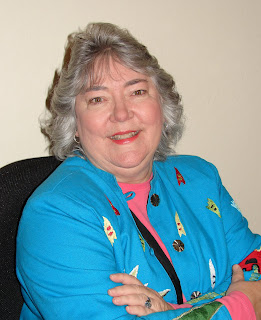 Today at the blog I have Loucinda McGary . Her latest book The Wild Irish Sea is available July 6th. Let's give her a warm welcome! :)

Hi Loucinda, Welcome to Anna's Book Blog! I'm glad to have you here. To start off can you tell the readers a little about yourself?

Hi Anna, I really appreciate you inviting me to your blog today!

The Wild Irish Sea is my third romantic suspense with paranormal elements published by Sourcebooks Casablanca. My previous books are The Wild Sight (also set in Ireland) and The Treasures of Venice (set in Italy but with an Irish hero).

I love to travel and to date I have visited 47 states and 32 foreign countries. I also like to set my books in some of the places I have visited.

You can find me online blogging with The Romance Bandits or on my personal blog, Aunty Cindy Explains It All.

The Wild Irish Sea is your newest release, can you tells us a little about it?

Parker and Amber O’Neill are twins who have shared a special mental connection all their lives. While on vacation in Ireland Parker accidentally witnesses a murder, and the killers target him as their next victim.

When Amber receives his mental distress call, she rushes to the rugged shores of Donegal to rescue her brother. In order to find him, she enlists the aid of a local reclusive police inspector, Kevin Hennessey.

In order to save Parker, Kevin and Amber must unravel the mystery of a selkie prince and face down a band of ruthless smugglers. Plus, they also discover a connection of mind, body and spirit like nothing they have ever experienced before.

Everyone who knows me will verify that I am NOT a morning person. I function best between noon and midnight. Therefore, I do most of my creative writing (first draft stuff) in the afternoons. I usually write four of five hours every afternoon, Monday through Friday. The weekends are a bit different since my DH might or might not be around. If he’s off pursuing his interest in auto racing (March through October) then I will write from about three PM until around midnight. Generally I don’t write on Sundays unless I’m really “on a roll” with my story or I’m facing a deadline.

I do revisions, rewriting, query letters and the like before or after I work on my work-in-progress.

When I’m in the midst of working on one of my contemporary romantic suspense stories, I generally read historical romances. I don’t like to read in the same genre I write because I don’t want any accidental ‘cross pollination’ to happen.

When I’m not writing (which isn’t very often) then I’ll read books with contemporary settings.

What type of research did you do for the book?

I’d already done quite a bit of research about Ireland, both modern and historical, for my first book The Wild Sight. But I did have to research some specific things about County Donegal, and I always use maps so that I know where things are in relation to each other and how far apart they are.

Ever since my niece gave birth to twins ten years ago, I’ve been interested in twins in general and read quite a bit about studies done on their relationships and differences between them and single birth siblings. I also found it extremely interesting to observe my grand-nephews. They were the inspiration that led me to create a set of twins for this book.

Legends about selkies crop up a lot in Celtic mythology. I ran into a few of them while researching The Wild Sight and read a lot more of them when I decided to incorporate selkie lore in The Wild Irish Sea. Many of the tales about selkies have dark and tragic endings, so I decided to put my own spin on them. Plus, I called a local marine mammal center and tried to incorporate some real seal behavior in my creatures.

What are 3 things that are "must haves" for you when you sit down to write a book?

When I’m working on my first draft, I must have privacy. I don’t like people traipsing in and out of my office (my son or my DH) and I get very cranky if the TV or stereo volume in the other room is too loud.

Second, I must have a thorough knowledge of my main characters before I can write my first draft. Most of the time, my story springs from my characters, so it is essential that I know a lot about them before I ever write a word. I only need sketchy details of the plot, because once I know and start writing about my characters, the plot pretty much falls into place.

Third, I really need chocolate! Doesn’t every romance writer? Nothing gets you out of a writing slump like a good piece of chocolate candy or a scoop of chocolate ice cream. When I was in college I worked part-time in a candy store, and developed a taste for dark chocolate which I still have. However, when the necessity for immediate chocolate therapy strikes, I’ll take milk, semi-sweet, whatever is handy.

Are there any real life people that have inspired the characters in your book?

As I mentioned, my twin grandnephews first spurred my interest in writing about a set of twins. Also, their father (my nephew-in-law) wanted to be included in one of my books, so as a joke, I named a murder victim after him. I’ll bet he never asks to be in one of Aunt Cindy’s books again!

Two of your books, The Wild Sight and the latest release, The Wild Irish Sea, are set in Ireland. Now I know the pull that Ireland has, having been there myself... What made you decided on Ireland as your setting more than once?

Basically because my editor asked me to. J A lot of readers and reviewers loved my portrayal of the real Ireland in The Wild Sight and I was happy to set another story there. Having Irish ancestors myself (yes, McGary is my real name), I’ve always felt a connection with Ireland. Plus, my DH is also Irish (his grandmother immigrated in 1912) and he has relatives who live in Northern Ireland. Visiting them is what first inspired me to write The Wild Sight and set it in Northern Ireland.

Selkie stories are always fun to read. Do you have a favorite selkie story or myth?

I love the movie The Secret of Roan Inish and the story of how the main character’s ancestor married a selkie woman. Her family legend said that every generation had a “dark one” who was a throw-back to the selkie. Her little brother was a “dark one” and because of the selkie blood, he wound up being raised by seals. In The Wild Irish Sea, I play on that relationship of selkies and seals, too.

Also, The Secret of Roan Inish was filmed on location in Donegal, Ireland and has some of the most gorgeous cinematography ever! I highly recommend you rent the movie just for the scenery alone.

What is up next? Will you continue with the "wild" books or are you moving on to something else?

None of my books are actually related, except for the fact that they all have Irish heroes. They are all stand-alone romantic suspense tales with a touch of the paranormal.

My current work-in-progress is something different in that it has no paranormal elements, but is a more traditional romantic suspense. One of my favorite modes of travel is cruising. I’ve been on sixteen cruises to date (number seventeen is scheduled for November), so I decided to set my next book on a cruise ship. I hope this will be the first in a series of books centered around a fictional cruise line. 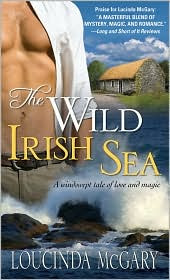 Drawn together by a force they can’t resist…
The telepathic image of her twin brother fighting for his life sends Amber O’Neill rushing to the rocky shores of Ireland. Desperate to find him, she turns to reclusive local inspector, Kevin Hennessy.

Bound together with a passion as relentless as the tide…
His past full of pain, Kevin has withdrawn from the world. But when the rain-drenched American appears on his doorstep with her wild tales of danger, something more than her sensuous beauty makes it impossible for him to turn her away.

The wildness of the sea, the mystery of a selkie prince, and a dangerous band of ruthless smugglers bring two lost souls together in a connection of mind, body, and spirit that can’t be denied...

ABOUT THE AUTHOR
Loucinda McGary took early retirement from her managerial career to pursue her twin passions of travel and writing. She sets her novels of romantic suspense in some of the fascinating places she has visited. She was a finalist in the 2006 Romance Writers of America Golden Heart contest in Romantic Suspense with the manuscript that eventually became her second published novel, The Treasures of Venice. Her first published novel, The Wild Sight won the Best First Book category in the 2009 More Than Magic contest. She lives in Sacramento, CA. For more information, please visit http://www.loucindamcgary.com/

Thanks to Sourcebooks I have 2 copies of The Wild Irish Sea to giveaway. To enter leave a comment along with your email address. Open to U.S. and Canada. Winners will be announced on July 10th. Good Luck!
at 12:07 AM