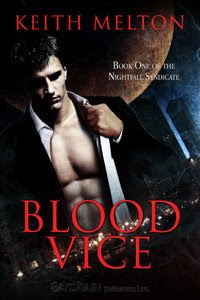 Business has never been better for hit man Karl Vance. Boston is awash in mafia blood, and Vance has a certain fondness for blood. He’s a master vampire—one of the most powerful of his kind. Having sworn to never again feed on the blood of innocents, Karl preys instead on Boston’s criminal underworld. Which makes him a valuable asset to those who deal in death.

Maria Ricardi intends to use that asset to its full extent in order to gain power within her patriarchal crime family. Vance thinks he’s been hired to keep track of the family’s princess, but she’s got a plan to get her hands dirty and earn the respect she deserves. And she’s not above using their instant attraction to get what she wants.

That driving ambition draws the attention of a rival clan’s newest and most dangerous "consultant." Alejandro Delgado, Vance’s centuries-old nemesis. Delgado zeroes in on the one chink in Vance’s armor—his fondness for the headstrong Maria.

When she becomes enslaved by Delgado’s unnatural kiss, only one thing is certain. Vance has to decide which he wants more. To settle the score—or rescue her soul.

Thoughts: Karl is Mafia hitman by trade and a vampire. Life for Karl was on the simple side; until he met Maria. Then his past came back to haunt him and it got way more complicated. I'm not really a fan of stories involving the mob, but vampires are a whole other deal. Having said that, I ended up really loving this story. Karl has a bit of mystery to him, and dangerous. Calm, cool and sexy. The first couple chapters were a bit slow, but after that it moved along nicely. It's one of the better Urban Fantasy stories I've read this year. I can't wait to find out what happens in book two.