[ARC Review] - Bad to the Bone 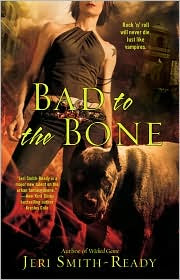 Summary and Blurb: If you’re just joining us, welcome to radio station WVMP, "The Lifeblood of Rock ’n’ Roll." Con-artist-turned-station-owner Ciara Griffin manages an on-air staff of off-the-wall DJs—including her new boyfriend Shane McAllister—who really sink their teeth into the music of their ‘Life Time" (the era in which they became vampires). It’s Ciara’s job to keep the undead rocking, the ratings rolling, and the fan base alive—without missing a beat.

For Halloween, WVMP is throwing a bash sure to raise the dead. They’ve got cool tunes, hot costumes, killer cocktails—what could go wrong? Well, for starters, a religious firebrand ranting against the evils of the occult preempts the station’s midnight broadcast. Then, when Ciara tracks down the illegal transmission, the broadcast tower is guarded by what appears to be…a canine vampire? And behind it all is a group of self-righteous radicals who think vampires suck (and are willing to stake their lives on it).

Now Ciara must protect the station while struggling with her own murky relationship issues, her best friend’s unlikely romance with a fledgling vampire, and the nature of her mysterious anti-holy powers. To make it to New Year’s in one piece, she’ll need to learn a few new tricks.…

Thoughts: In this installment someone starts taking over the WVMP broadcast. The radio station is being targeted by a group that want to destroy the station in more ways than one. Is it a religions group? Someone from Control? A cult? There are suspects a plenty, but if you read the first book you know that Ciara and the vampires won't stand for it.

Wicked Game was on my list of Top 20 Favorite books on 2008 so, I've been looking forward to reading the second one and was overjoyed to find the ARC in my mailbox. Ciara and her obsessive-compulsive vampire DJ's are back for a new adventure and it doesn't disappoint.

This story was action packed, with wit and loads of drama. Excellent writing that had me turning the page to see what would happen next. And just when you think the story has come to an end... the author brings you more action and mayhem. This book was both light and dark, but a very enjoyable read. I thought it was a brilliant ending and can't wait reading more stories set in this world.

Favorite Lines:
"Maybe he got decockinated in a tragic vamp-fucking accident."
~ Lori to Ciara

WVMP Radio series:
Wicked Game
Bad to the Bone
at 12:14 AM