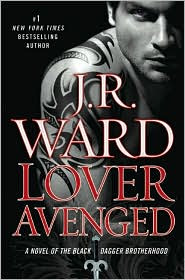 Summary: Caldwell, NY, has long been the battleground for the battleground for the vampires and their enemies, the Lessening Society. It’s also where Rehvenge has staked out his turf as a drug lord and notorious nightclub that caters to the rich and heavily armed. His shadowy reputation is exactly why he’s approached to kill Wrath, the Blind King, and leader of the Brotherhood.

Rehvenge has always kept his distance from the Brotherhood, even though his sister is married to a member. Because he’s a sympath, his identity is a deadly secret- the revelation of which will result in his banishment to a colony for sociopaths. And as plots within and outside the Brotherhood take their toll against Rehvenge, he turns to the only source of light in a darkening world- Elhena, a vampire untouched by the corruption that has its hold on him- and the only thing standing between him and eternal destruction.

Thoughts: I finished reading Rehv's book a few days ago. I had plans to take it slow and savor it, but that never works as planned. I finished it in about three days, the story really sucked me in and I loved every minute. There is something about each brother I like and I've enjoy all the books. While Zsadist has always been my favorite brother, I think Lover Avenged is the best story in the series.

Once again there are different plots going on. Lassiter and Tohr were great. It was also nice that we got to see more of Wrath and Beth. Even though the brothers & their Shellens appear in the other books I feel Wrath and Beth have been pushed out of the picture alot.

I was never a big fan of Rehv's but this book really made me like him. The development between Rehv and Ehlena was sweet, tempting and very sexy. The only things that I didn't really like were the Lessers (sorry but they bore me to no end). Then there is John Matthew. I don't like the turn his character has taken. But I assume and hope the issues will get resolved in future books. Other than those two factors I felt the book was solid and a great read.