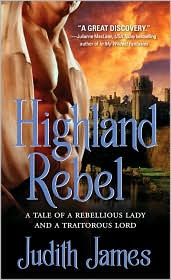 Summary: His wit and intoxicating good looks have served him well...

Jamie Sinclair, abandoned and despised at an early age, learned quickly to fend for himself. Now he looks forward to finishing one last mission for his king and finally collecting his reward...

Raised to rule her clan, She'll stop at nothing to Protect her own.

Daughter of a Highland laird, heiress to a title, a fortune, and vast properties, Catherine Drummond rides fearlessly into battle against the English forces sent to quell the Scots' rebellion...

When Catherine falls in to the hands of vicious mercenaries, Jamie impulsively marries her on the spot to save her from a grim fate. But in a world where princes cannot be trusted and faith fuels intolerance, hatred, and war, no good deed goes unpunished...

Thoughts: They say opposites attract, and that stands true in this book. Both Jamie and Cat were sure of their destinies and even more sure they had nothing to do with being together. But fate had other plans.

Highland Rebel is the second novel from Judith James. This story takes place in Scotland, England & Ireland during the late 1600's. Wonderfully written. It's captivating and heart wrenching. I was sucked into Jamie and Cat's world. Both having interesting personalities. It was fun seeing them fight, play their games and eventually come together.

What I love about reading a Judith James book is her attention to detail. Always thorough and grabs the reader. The research she does, shines through in her writing. Not only do you enter a different world, but you feel as if you've been transported there.