The last month or so I've been hearing alot of buzz about Michelle Moran's books, which peaked my interest. I love reading about Egypt, especially about Cleopatra. I'm looking forward to both theses books. So I'm very happy to be hosting this giveaway with Michelle.

A signed copy of The Heretic Queen & A signed copy of Cleopatra's Daughter are up for grabs. I'll be picking two lucky winners. To enter just leave a comment on this post along with you email address. Winners will be announced on September 15th.

Good Luck!!
Also not to be missed is Michelle's website, she currently has three different giveaways going on. Check it out Here. 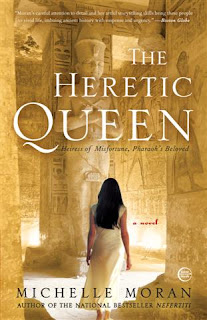 In ancient Egypt, a forgotten princess must overcome her family’s past, and remake history.

The winds of change are blowing through Thebes. A devastating palace fire has killed the 18th dynasty’s royal family—all with the exception of Nefertari, niece of the reviled former queen Nefertiti. The girl’s deceased family has been branded as heretical, and no one in Egypt will speak their names. A relic of a previous reign, Nefertari is pushed aside, an unimportant princess left to run wild in the palace. But all of this changes when she is taken under the wing of pharaoh’s aunt, and brought to the Temple of Hathor where she is educated in a manner befitting a future queen.

Soon Nefertari catches the eye of the crown prince, and despite her family’s history, they fall in love and wish to marry. Yet all of Egypt opposes this union between the rising star of a new dynasty and the fading star of an old, heretical one. While political adversity sets the country on edge, Nefertari becomes the wife of Ramesses the Great. Destined to be the most powerful pharaoh in Egypt, he is also the man who must confront the most famous exodus in history. 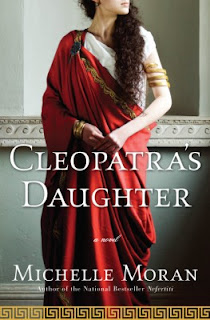 Coming September 15th
Book Description:
The marriage of Marc Antony and Cleopatra is one of the greatest love stories of all time, a tale of unbridled passion with earth-shaking political consequences. Feared and hunted by the powers in Rome, the lovers choose to die by their own hands as the triumphant armies of Antony’s vengeful rival, Octavian, sweep into Egypt. Their three orphaned children are taken in chains to Rome, but only two—the ten-year-old twins Selene and Alexander—survive the journey. Delivered to the household of Octavian’s sister, the siblings cling to each other and to the hope that they will return one day to their rightful place on the throne of Egypt. As they come of age, they are buffeted by the personal ambitions of Octavian’s family and court, by the ever-present threat of slave rebellion, and by the longings and desires deep within their own hearts.

The fateful tale of Selene and Alexander is brought brilliantly to life in Cleopatra’s Daughter. Recounted in Selene’s youthful and engaging voice, it introduces a compelling cast of historical characters:

Selene’s narrative is animated by the concerns of a young girl in any time and place —the possibility of finding love, the pull of friendship and family, and the pursuit of her unique interests and talents. While coping with the loss of both her family and her ancestral kingdom, Selene must find a path around the dangers of a foreign land. Her accounts of life in Rome are filled with historical details that vividly capture both the glories and horrors of the time. She dines with the empire’s most illustrious poets and politicians, witnesses the creation of the Pantheon, and navigates the colorful, crowded marketplaces of the city where Roman-style justice is meted out with merciless authority.

Based on meticulous research, Cleopatra’s Daughter is a fascinating portrait of Imperial Rome and of the people and events of this glorious and tumultuous period in human history. Emerging from the shadows of history, Selene, a young woman of irresistible charm and preternatural intelligence, will capture your heart.