[Review] - Ballad: A Gathering of Faerie 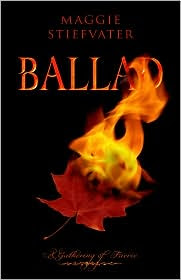 I received this book for review from Flux.

Summary: James Morgan has an almost unearthly gift for music. And it has attracted Nuala, a soul-snatching faerie muse who fosters and then feeds on the creative energies of exceptional humans until they die. James has plenty of reasons to fear the faeries, but as he and Nuala collaborate on an achingly beautiful musical composition, James finds his feelings towards Nuala deepening.

But the rest of the fairies are not as harmless. As Halloween—the day of the dead—draws near, James will have to battle the Faerie Queen and the horned king of the dead to save Nuala's life and his soul.

Thoughts: The Summer & the events with the faeries have ended. James & Deirdre are now attending the music school ThornKing-Ash, where it seems life has gone back to normal. But then James and this music catches the eye of a Soul snatching faerie named Nuala...

Ballad continues the complex battle between human and faerie. It makes for one riveting tale, highly enjoyable. Filled with suspense and adventure. Ms. Stiefvater has created a dark, thrilling world that I look forward to visiting again. I was so excited to see that James was narrating this book, he kinda got pushed aside in book one, and I thought his personality too intriguing not to get his own book. If you think you'll like this book, I suggest reading Lament to see how James & Deirdre's story began.