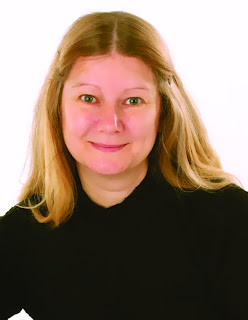 I'm happy to have Amanda Grange here to guest blog. She is the author of Mr. Darcy, Vampyre and Mr. Darcy's Diary guest blogging. Today she's here to talk about one of my favorite subjects, Vampires! Thanks, Amanda for stopping by!

Hi, Anna, and thanks for inviting me along to your book blog, it’s great to be here to talk about vampires. There have been so many great vampires over the centuries it’s hard to choose my favourites but I’m going to go for Dracula and Angel.

I’m choosing Dracula because both the book and the character were so revolutionary and they established a lot of the things we now associate with vampires, like garlic and crosses, some of which came from folk lore but some of which came from Bram Stoker’s own imagination. The book is full of atmosphere and that’s one of the things I love about traditional vampire tales, the rich atmospheric writing. Dracula himself is a complex character, he’s gruesome in many ways and yet he’s a man with a past. He’s known love and there is something tragically romantic about his story as well as horrifying. I created a character called Count Polidori in Mr. Darcy, Vampyre who has had an ill-fated love affair in his past, and there is an air of melancholy about him.

One of the things that appeals to me about vampires is that they are often at war with themselves, it gives their stories an epic feel and it’s one of the things that make them interesting for me. That’s probably why I love Angel, from Buffy the Vampire Slayer, so much. He’s a really complicated character. He’s a creature who is part human and a part of him longs to belong in the human world, but he is also an outsider. When he turns up at places like the Bronze, he’s always in the shadows, half hidden, never fully in the light.

I love this kind of duality, it’s the kind of duality Mr. Darcy has in Mr. Darcy, Vampyre. He lives in the world and yet he can never really belong in it because he’s so different.

It was in fact whilst watching Buffy that I first thought of Mr. Darcy as a vampyre. I think it was probably because Angel and Darcy are both so similar, they are both very attractive and yet at the same time they both hold back. They don’t throw themselves into life, and the idea just hit me, what if Darcy was aloof because, unbeknownst to anyone, he was a vampire? And what if it was his love for Elizabeth that made him want to cross the kind of no-man’s land between vampires and humans and embrace life to the full? How would that affect his relationship with her, loving her and yet knowing he had a terrible secret? And how would it affect her when she found out?

The idea took root in my imagination and over the years I kept thinking about it, turning different ideas over in my mind. But it wasn’t until I started re-reading some of the Gothic novels of Jane Austen’s time that I saw a way I could write a book that satisfied me. I saw that I could write a paranormal sequel to Pride and Prejudice which would take the characters away from their safe, ordinary world, by sending them on their honeymoon to France and Italy. There, in this new world, I could create another completely new reality for them. It’s part Austen, part vampire and a new journey, a new adventure for Elizabeth and Darcy. 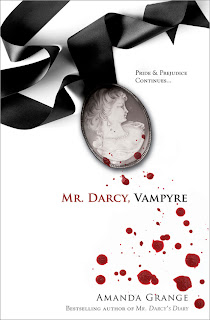 Amanda Grange's style and wit bring readers back to Jane Austen's timeless storytelling, but always from a very unique and unusual perspective, and now Grange is back with an exciting and completely new take on Mr. Darcy and Elizabeth Bennet.

Mr. Darcy, Vampyre starts where Pride and Prejudice ends and introduces a dark family curse so perfectly that the result is a delightfully thrilling, spine-chilling, breathtaking read. A dark, poignant and visionary continuation of Austen's beloved story, this tale is full of danger, darkness and immortal love.


About the Author
Amanda Grange is a bestselling author specializing in creative interpretations of classic novels and historic events, including Jane Austen's novels and the Titanic shipwreck. Her Jane Austen sequel Mr. Darcy’s Diary is a bestseller in the US and the UK. She lives in England. For more information on Amanda and her books, please visit http://amandagrange.com/. For more information on Mr. Darcy, Vampyre, please visit Amanda’s Blog and the Sourcebooks Spotlight Page. Interested in reading an excerpt? Follow us on Twitter the week of Halloween!

Giveaway
Thanks to Sourcebooks I can offer a copy of Amanda's Mr. Darcy, Vampyre. Open to U.S. & Canada. To Enter leave a comment along with your email address. I will announce the winner on October 31st.
at 12:20 AM