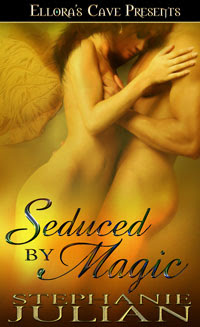 Summary: Justin Johannson knows there are mythical creatures living among us. After all, he has been trying to prove their existence for ten years. Research gets a whole lot more interesting when he finds a winged woman in his bed and his sexual fantasies come to life.

Etruscan folletta Scarlata is convinced Justin is in league with an evil businessman bent on capturing her for scientific study, which is so not going to happen. She decides that Justin needs to be taught a lesson to leave her and the rest of the mythical creatures in peace — but before, she might just have a little fun of her own.

The beautiful folletta never expected to fall for a human and Justin is about to discover that true magic really does exist in the world. And in him.

Thoughts: Justin has been trying to prove the existence of mythical creatures for years. One night he discovers a winged women- Scarlata - in his bed. His fantasy come true but Scarlata who is a Folletta, a race of Etrusean Fata believes he has evil intentions. So, to begin with her plan and his don't exactly mesh. 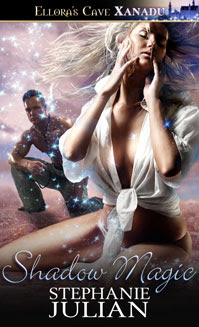 These ebooks are all sold at Ellora's Cave/Jasmine Jade Enterprises You can also find the first two stories in the book- Shadow Magic. It can be purchased at Amazon.com
at 6:36 PM