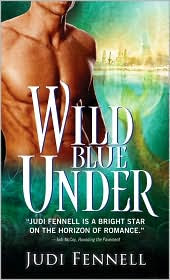 Summary: The underwater kingdom is his as soon as he claims his Queen...

Rod Tritone has the looks and charms to snag any queen he wants for his Mer kingdom, but unfortunately, it's not up to him. As fate would have it, the one woman destined to join him on the throne is terrified of water...

She lives in land-locked Kansas and has no idea she's a Princess...

Valerie Dumere thinks Rod is gorgeous and irresistible--but why does he keep insisting she has another side to herself that only he can show her? Somehow, Rod has to prove to her who she really is. But when she finds out the truth, will she ever forgive him?

Thoughts: Valerie Dumere doesn't know it yet, but she's destined for greater things. Rod Tritone, next in line to be King to the Mer people walks into her life and turns it upside down. With his good looks and charm, Valerie can't help being attracted to him.

Wild Blue Under is a riveting tale. This story is filled with danger, romance and intrigue. Ms. Fennell has wowed me again with her world of under the sea characters. While I enjoyed the romance between Rod & Valerie, I loved the hilarious talking seagull, Livingston a lot more! In a genre of vampire, werewolves and demons this series is a breath of fresh air.