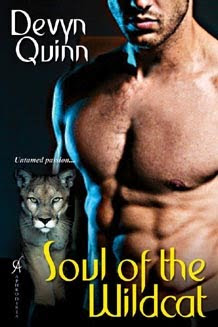 Devyn Quinn's latest release (came out Nov 24th) is Soul of a Wildcat. Thanks to Ms. Quinn for providing the copies for the giveaway. There are 2 copies being offered! Below you will also find the book summary and an excerpt from the book.

To enter leave a comment with your email address. Open to all. The winners will be announced on December 7th. Good Luck!!

Wreathed in mists that are older than time, the mountain sanctuary of Jesse Clawfoot is threatened, and an ancient magic transforms him into a cougar. Ferocious. Powerful. On the prowl and lethally silent—until his instincts compel him to hunt for a mate, one who will help keep his people from extinction. His keen senses lead him to Dakoda Jenkins, whose beauty and compelling sensuality awaken his deepest lust and most ardent desire. Once aroused, Jesse must lure her to his hidden lair…and unleash her wildest passion…

Excerpt:
Dakoda’s stomach lurched. Hand lifting, she closed her eyes and pressed her palm against her forehead. “The concussion,” she reasoned, barely speaking above a whisper. “It’s making me hallucinate.”

She was seeing things. Yeah. That’s it. Between the trauma of witnessing Greg’s murder, the exhaustion of keeping herself in one piece, and a near rape, her trolley had somehow slipped off the track of sanity. Reason was going in an entirely different direction, exploring uncharted territory.

I’m losing it for sure, she thought. Cougars don’t turn into men.

She inwardly cringed. The idea seemed crazy, even inside the confines of her apparently demented mind. Of course a human couldn’t turn into an animal. Magic, hocus-pocus, call it what you will, didn’t exist.

A man’s voice broke through the curtain Dakoda was attempting to pull around her murky senses. “I don’t mean to be a pain in the ass, but I can assure you I’m not a figment of your imagination.” A pause. “Though if it helps I wish I were. I’d rather be any place else but here.”

The apparition was talking. To her.

Dakoda lowered her hand. She opened her eyes. Sure enough, the naked man was still there.

For a moment she considered the idea she’d fallen asleep. It made sense her damaged, desperate psyche might conjure up such an extraordinary scenario. It could all just be a creation of her imagination.

But the scene unfolding before her eyes didn’t have the surreal, kaleidoscopic quality of a dream. In dreams, the angles were off, odd and vague, stretched and distorted. What she saw now was all sharp and very much in focus.

“You were the cougar,” she said, a slight frown curving her mouth. “I know what I saw.”

The man sat up slowly, moving with lazy grace as he settled into a sitting position not quite as distracting. “Yeah,” he said quietly. “But what do you see now?”

What she saw was enough to take her breath away all over again, and in an entirely different way. The one thing she definitely hadn’t been prepared for was a man who looked like he’d just walked out of the pages of a Playgirl magazine.

Jet black hair fell past his shoulders, parted exactly in the middle and surrounding a face that might have been chiseled from stone; high forehead, prominent cheekbones, strong jaw line. His wide set eyes were dark, so black she couldn’t find a hint of irises in their depths. Face lightly stubbed, his mouth was generous, full and sensual.

The tell-tale signs of a hard and rugged life had etched themselves into his skin. Scars slashed down his shoulders, his abdomen and legs. Knotted and long healed they hinted deadly claws and jaggedly sharp teeth.

But it was the color of his skin that really made Dakoda sit up and take notice. The shade might have been compared to that of a copper pot, used for ages over an open fire. A thin gash angled above his left eye, still puffy and tender. The line of his nose also wasn’t perfect, as if broken by a foot or the stock of a rifle.

Overall, the effect of viewing him as a whole was stunning. Here was a man who’d lived a hard life, living on the edge as he fought to survive in a land yanked out from under his feet by encroaching civilization.

Assuming he was even real.

Real or not, though, he looked damn good. Larger than life, his masculine presence filled the small cell.

Gazing at him, a final possibility loomed large in the back of Dakoda’s mind, floating out of the shadowy recesses like a red-eyed specter. What if Greg wasn’t the only one who died? Maybe she’d also been hit by the shotgun’s blast. And this place was some kind of limbo, a realm where the normal rules of existence didn’t apply. Logic certainly didn’t.

She looked at the man who’d once been a cougar. “Did I die?” she asked, her voice barely above a whisper.

He grinned. “You’re very much alive.”

Testing the theory, Dakoda gave her cheek a hard pinch, all too aware of the pain. Would the deceased feel any pain? She didn’t think so.

“I’m not supposed to be here,” she informed him for lack of something better to say.

His lips pulled back in a familiar, feral smile. “Shit happens to the best of us.”

His words were delivered as a verbal slap, snapping her back to reality. Not that it was one she wanted to continue experiencing much longer. As it stood, she was locked in a small cell out in the middle of some godforsaken mountain tract, having been kidnapped to be sold as a slave in some twisted animal act to a private seller. And oh, yeah, her partner had been shot dead right in front of her, gunned down in cold blood by a wanted criminal.

Nothing about this day could get any worse…or any more unbelievable.