Today I'm excited to have Angie Fox here. She is the author of the Demon Slayers series. This was fun interview, plus we got some cool items to giveaway!

Hi Angie, Welcome to Anna's Book Blog! I'm glad to have you here. To start off can you tell the readers a little about yourself?

Well, I write the New York Times bestselling Accidental Demon Slayer series, which are a bunch of offbeat books about a preschool teacher who finds out she’s a demon slayer and then has to go out and save the world (while figuring out her powers along the way).

As far as me personally, I’m an advertising writer turned novelist and I just love writing. When a story grabs hold of me, it’s a kick to grab my laptop and see where the story leads me.

A Tale of Two Demon Slayers is your newest release, Can you tell us a little about it and the series?

The Accidental Demon Slayer books are funny paranormal romances about a straight-laced preschool teacher who runs smack dab into her fate when a demon shows up on her toilet bowl. Turns out, that’s just the beginning. Soon her hyperactive terrier starts talking, and her long-lost biker witch Grandma is hurling Smuckers jars filled with magic. And just when she thinks she’s seen it all, Lizzie learns she’s a demon slayer—and all hell is after her.

Of course, that’s not the only thing after her. Dimitri Kallinikos, a devastatingly handsome shape-shifting griffin needs Lizzie to slay a demon of his own. But how do you talk a girl you’ve never met into going straight to the underworld? Lie. And let’s just say he tries a little bit of seduction too.

How did you come up with the idea for your Demon Slayer Series? Did any real life people inspire any of the characters?

It started as a kernel of an idea that amused me. What if a straight laced preschool teacher suddenly learns she’s a demon slayer? And what if she has to learn about her powers on the run from a fifth level demon? Ohhh and wouldn’t it be fun if she’s running with her long-lost Grandma’s gang of geriatric biker witches?

I started writing and let the storyline evolve based on the characters and that central issue of what happens when a reluctant heroine is thrust into a series of extraordinary situations. And I knew the series was working when I couldn’t wait to get back to the keyboard every day.

As far as real life inspiration? I have to tell you the biker witches are based on my mom’s crazy sisters. You never know what’s going to happen when my five aunts get together and I wanted to capture that feeling in a book.

Do you have to do a lot of research for your books?

Loads, actually. First off, the biker witches ride Harley's, and I’d never been on a motorcycle before. Second, I had to figure out how to get Pirate the dog onto a bike.

I went online and learned about the Biker Dogs Motorcycle Club, made up exclusively of Harley riders and their dogs. I ended up meeting some of them, along with a few other bikers along the way. These bikers were so great to me. They hoisted me onto the back of their Harley's (with dogs in tow). They took me to biker rallies (note to self: don’t wear pink). And they laughed at me when I tried to put my helmet on backwards (I still say I was distracted by the Pomeranian wearing a tiny pair of motorcycle glasses).

After a few outings with my new biker friends, I was able to make my geriatric biker witch characters a lot more realistic. And I took home some great pictures, too.

What character do you like writing about the most, and why?

That’s tough. I think my first answer would have to be Pirate, the dog – just because he surprised me. When I sat down to write the Accidental Demon Slayer series, I had no notes about a sidekick for my heroine. But in the first book, when Lizzie learns she’s a demon slayer and there are some very scary, very angry creatures on her tail, she takes comfort in her dog. As I was writing, I thought, ‘This is a sweet moment. Now how do I throw her off?’

I made the dog say something to her. Nothing big. After all, he’s only after the fettuccine from last week. And he knows exactly where Lizzie can find it (back of the fridge, to the left of the lettuce crisper, behind the mustard). It amused me, so I did it. Thanks to her unholy pow 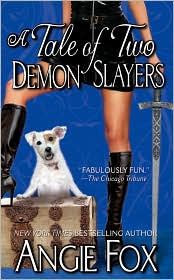 ers, Lizzie can now understand her smart-mouthed Jack Russell Terrier. I ended up having a ball with it. Pirate can say and do things that my heroine can’t. He’s such a kick to write. And he’s evolving too. Like in my latest book, A Tale of Two Demon Slayers, Pirate gets a pet. This upsets Lizzie greatly, because in her opinion “A pet can’t have a pet.” But you’ll find that Pirate the dog can be rather persuasive.

A Tale of Two Demon Slayers is the 3rd book in the series and you've been contracted for 4 and 5. Do you see a conclusion to this series, or do you view it as an open ended series?

Well when I planned out the series, I outlined five books. It’s the exact number Lizzie and the gang need in order to make a complete journey of discovery. Personally, as a reader, I think some series tend to go on too long. I want each book to have an impact, so I’m going to end the series at five. Besides, as an author, I have so many more ideas for new series that will be just as fun and exciting. I promise.

I read everything – mysteries, biographies, women’s fiction, historicals, but my favorite is paranormal/urban fantasy.

Do you have any favorite authors, that are must reads?

I’m one of those people who always has a book in her purse. Right now, I’m addicted to the Sookie Stackhouse series. I loved Undead and Unworthy (although Undead and Unwed will always be my favorite). I read Katie MacAlister, Phillipa Gregory, Julia Quinn, Elizabeth Peters, Laurell K Hamilton, JR Ward. I just discovered Malcom Gladwell’s books (yes, I’ve been buried under a rock). I’m blowing through those right now. I also have Dakota Cassidy, the latest Michelle Rowen and Jim Butcher’s Dresden Files series on my ever-growing TBR shelf. And I just read another really great cozy mystery by Rhys Bowen. 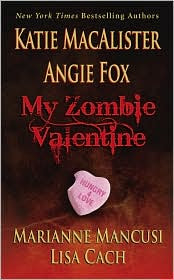 ave another release out this month called My Zombie Valentine. Can you tell us a bit about your contribution to this anthology?

First off, I have to tell you that when my editor called and said they wanted me for My Zombie Valentine, I just had to laugh. And then I thought about it – don’t zombies deserve love too?

My story for the anthology is called Gentlemen Prefer Voodoo. The heroine of the story, Amiele Fanchon D’Honore Baptiste (Amie for short) is a lonely New Orleans voodoo mamba. Amie lives in the modern city and is tired of party boys and guys who can’t commit. She needs a gentleman in her life. So she weaves a spell to call the “perfect man for her.” But she should have been more specific because the perfect man for her died in 1811.

Dante Montenegro is a Spanish gentlemen who has been haunting St. Louis Cemetery Number One, waiting for his true love to call him back to life. He’s thrilled when Amie’s spell works and emerges the cemetery, very sexy (if slightly dirty). When her hot zombie shows up at her door, Amie is determined to put him back into the ground. Dante is determined to make her fall for him.

It’s really very sweet - in a zombie sort of way.

Young Adult books seem to be the hot thing these days. Alot of Urban Fantasy & Paranormal Romance Authors are dipping into this genre with new series. Is this something you've thought about doing?

Probably not, just because I have so many ideas for adult urban fantasy. But I do like to read the young adult books, just to see all of the fun new things authors are writing.

A quiet place, Diet Coke and a dog on my lap.

Thanks to Angie there are 3 very cool prizes to giveaway to 3 lucky winners. This one is open to everyone. To enter leave a comment along with your email address. The winners will be announced on January 31st.
What are the prizes you say....