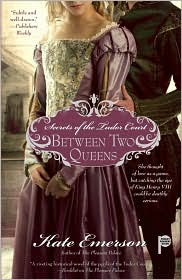 I received this book for review from the publisher, Simon and Schuster.

Summary: Pretty, flirtatious, and ambitious. Nan Bassett hopes that an appointment at the court of King Henry VIII will bring her a grand marriage. But soon after she becomes a maid-of-honor to Queen Jane, the queen dies in childbirth. As the court is plunged into mourning, Nan sets her sights on the greatest match in the land . . . for the king has noticed her. After all, it wouldn’t be the first time Henry has chosen to wed one of his queens’ maids of honor. And in newly Protestant England, where plots to restore the old religion abound, Nan may be the only one who can reassure a suspicious king of her family’s loyalty

But the favor of a king can be dangerous and chancy, not just for Nan, but for her family as well . . . and passionate Nan has a deep secret she must shield from the king and all others, for it could put her future—and her life—in grave jeopardy should anyone discover the truth.

Based on the life of the real Anne Bassett and her family, and drawing extensively from letters and diaries of the time, Between Two Queens is an enthralling picture of the dangers and delights of England’s most passionate era.

Thoughts: The story begins in 1537, King Henry VIII is in the middle of his reign and married to his 3rd wife Jane Seymour. Nan (Anne) Bassett & her sister Cat (Katherine) arrive at court. One of them is to be chosen to be a maid of honor to Queen Jane. Nan soon learns that the Tudor Court is a dangerous place to live, with games and intrigue around every corner.

I have always enjoyed reading about the Tudor Court but this is the first time I've read anything about Anne Bassett or her connection to the court. I really felt for Nan, while she was a maid of honor, she was constantly being moved around. I believe this made her feel like she didn't know where she belonged. While she was ambitious, she just wanted her bit of happiness.

I found Between Two Queens to be a riveting tale rich in detail and character. A story of hope, ambition, and finding your place in life. Nan Bassett, a most interesting figure. She is full of spirit and hope that will keep you turning the page.