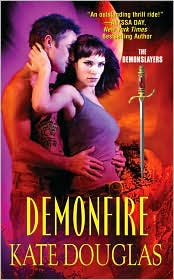 I received this ARC for review from the author.

Summary: Since time began, the Earth has served as a balance between the world of darkness that is the Abyss, and the paradise known as Eden. Now the battle between good and evil has reached a tipping point, and survival depends on one fallen demon— and the woman he can't resist...

Newspaper reported Eddy Marks thinks she knows everything about her quite hometown. She couldn't be more wrong. Turns out Evergreen, California, is the site of a vortex that allows demons to cross over to Earth, and the only one who can stop them is an unbelievably sexy fallen demon named Dax who has just crashed into Eddy's life.

Thoughts: Raise your hand if you'd like to find a hunky guy in your garden shed... yeah me too! That is exactly what happens to lucky girl, Eddy Marks. She discovers Dax, who is a demon on her property. From that very moment he shakes her world up in more ways than one.