[Review] - Dead, Undead or Somewhere In Between 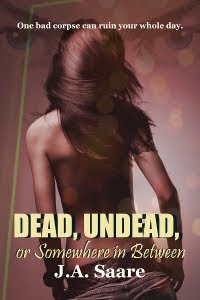 I received this book to review from the author.

Summary: One bad corpse can ruin your whole day. No one knows that better than Rhiannon Murphy.

She’s left behind the flash and sass of Miami for the no-nonsense groove of New York City, eager for a clean slate and a fresh start. A bartender by trade, a loud mouth by choice, and a necromancer by chance; she’s managed

to keep her nifty talent hidden from those around her – until now.
The deliciously good-looking vampire Disco knows her secret, and when he strolls into her bar to solicit help investigating the mysterious disappearances of his kind from the city, she discovers he’s not the kind of person that appreciates the significance of the word no.

But in a world where vampires peddle their blood as the latest and greatest drug of choice, it’s only a matter of time before the next big thing hits the market. Someone or something is killing vampires to steal their hearts, and unlike Rhiannon, this isn’t their first stroll around the undead block.

Thoughts: Rhiannon is a necromancer that works at a Gentleman's Club as a bartender. Her night started off good. Whiny drunks, exotic dancers hissy fits, a complaining boss... she can handle. But when delectable vampire, Disco shows up demanding to talk to her she knows her night is about to go down hill.

Dead, Undead or Somewhere in Between was a fast, and exciting read. Ms. Saare was created a gritty and sexy world. She does a wonderful job of weaving the paranormal into an urban setting. Rhiannon is definitely one of my favorite highlights in the story. She's my kind of girl. Blunt and doesn't take crap from anyone or anything. The end was also something of a surprise, I wasn't expecting that. I'm looking forward to see what happens in the next book.