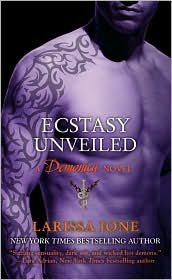 Summary: A DEMON ENSLAVED...
Lore is a Seminus half-breed demon who has been forced to act as his dark master’s assassin. Now to earn his freedom and save his sister’s life, he must complete one last kill. Powerful and ruthless, he’ll stop at nothing to carry out this deadly mission.

AN ANGEL TEMPTED...
Idess is an earthbound angel with a wild side sworn to protect the human Lore is targeting. She’s determined to thwart her wickedly handsome adversary by any means necessary—even if that means risking her vow of eternal chastity. But what begins as a simple seduction soon turns into a passion that leaves both angel and demon craving complete surrender.

Torn between duty and desire, Lore and Idess must join forces as they battle their attraction for each other. Because an enemy from the past is rising again—hellbent on vengeance and unthinkable destruction.

Thoughts: While I enjoyed the last book (Passion Unleashed), I had trouble getting into the story. But with Lore's story I have been sucked back into the series. It's been a joy to read. Ecstasy Unveiled, made me remember why I fell in love with this series. The fabulous world-building, fast action and the ever important sexy demon brothers. They are all in their own ways dangerous, fierce and very hard to resist.

I really enjoyed Lore and Idess, they are definitely two of my favorite characters in the series. Idess comes into Lore's life - kicking his ass and she turns his world upside down. Idess and Lore are both lost and alone in the world, but together they are a force to be reckoned with. I highly recommend this book and series.

Thanks to Hachette Book Group I have 5 copies of Ecstasy Unveiled to giveaway.
To Enter:
at 12:18 AM