This is one of my favorite series. Ms. Amanda Feral is wonderful character. I love both the humor and gore of this series. You'll never look at zombies the same way again. I highly recommend this series. 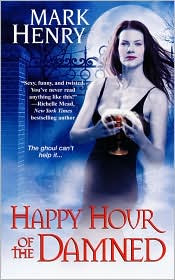 Alive, ad exec Amanda Feral worked hard to wring enjoyment out of her days. Now that she's a zombie, it's a different story. Turns out, Seattle is home to glamorous undead of every description, and Amanda—stylish and impeccably groomed even in the afterlife—is swigging cocktails and living large (so to speak) among its elite. But there are downsides. Not being able to stomach anything except alcohol and human flesh, for instance. And the fact that someone is targeting Seattle's otherworldly inhabitants for their own sinister reasons.

Preying on the undead is seriously uncool. The only option is for Amanda and her zombie BFF Wendy and gorgeous gay vampire pal Gil to unearth the culprit among the legions of Seattle's bloodsuckers, shapeshifters, reapers, succubi, and demons—before they all meet a fate a lot worse than death. . .

My review of Happy Hour of the Damned can be found here. 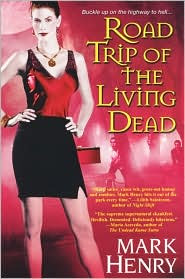 Celebrity party girl Amanda Feral is back from the dead, and hungrier than ever for a good time. With her zombie gal pal Wendy and vampy gay sidekick Gil, this stone cold fox is dressed to kill, on the prowl, and ready to take a big juicy bite out of Seattle's supernatural nightlife. But what's a zombie chick to do when her "Mommie Dearest" gets sick? If you're Amanda Feral, you can either ignore the wicked old witch-or bury the past by visiting Ethel before she kicks it. Amanda's not thrilled about the idea of crossing three states just to be criticized. But Wendy, who's always looking for fresh meat, is up for the adventure. And Gil, who just launched his "luxury" resurrection business, needs to disappear because a pissed-off client is out for his blood.

First, they pack their stiletto pumps and plasma into a skeevy rattrap on wheels that used to be a Winnebago. Then, with a little help from a Korean-ghost hood ornament, a masochist named Fishhook, and a slew of "moderately accurate" psychics, they hit the highway-their way. Of course, they'll have to navigate past some neo-Nazi skinheads, a horny dust devil, a hunky werewolf cop (who could pass for an underwear model) and an unsightly horde of Kmart shoppers. But for this glamorous gang of ghouls this trip is about to take a dangerous detour that could give road kill a brand new meaning . . . 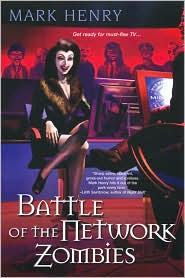 In Seattle's undead circles, Amanda Feral is one of the beautiful zombies. Of course, when you're socializing with werewolves, devils, and rampaging yetis, there's not that much competition. Still, Amanda has a stylish rep to maintain, which is getting tricky now that her tanking ad agency is obliterating her finances. The fastest way to make some cash: appear on a new reality show, American Minions, hosted by lecherous wood nymph Johnny Birch. Classy? Maybe not, but a girl's gotta eat.

With zombie gal pal Wendy posing as her bitchy agent, Amanda settles in to "Minions Mansion," crowded with 24-7 video cameras and undead fame whores. When Johnny is found incinerated in a locked room, Amanda decides to channel her inner Miss Marple (minus the fugly cardigans) and find out who's responsible. Was it Hairy Sue, the white trash stripper yeti? Tanesha, the glamorous trannie werewolf? Angie, the Filipino vampire with a detachable head? Unveiling the culprit in a heart-stopping finale won't just save the show from cancellation, it might just keep Amanda alive—or as close as a ghoul can get...

I have two copies of Happy Hour of the Damned (mass market) up for grabs. To enter:

Save Amanda Feral!
To learn more click the graphic.