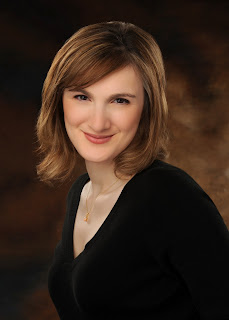 Hi Amanda, Welcome to Anna's Book Blog! I'm glad to have here. To start off can you tell the readers a little about yourself?

Hi Anna, thanks for inviting me to come chat today! I’m someone who always had stories floating around in my head, but never thought to write them down until a few years ago. I joined a writers group and found the inspiration I needed to actually write that first manuscript. I’m thrilled to be publishing my first book. This is a direction I never pictured in my life, but it’s really fun!

The Highlander Sword is your first release, can you tells us a little about it?

I love the history of Scotland and the iconic image of the rugged Highland warrior. My story begins with one of these kilt-wearing warriors, Padyn MacLaren, who has been scarred both emotionally and physically by betrayal, and pairs him in an arranged marriage with the quiet Lady Aila Graham who had always planned on becoming a nun. Their relationship is not a smooth one, and is hindered by a traitor who wants to claim Aila for himself, but in the end love triumphs.

My day generally begins with one of my children waking me up, usually to tell me that the toilet has overflowed or the cat puked on the carpet or something like that. I’m usually late so I need to hustle to get the kids dressed, fed, and off to school. Then it’s off to my day job, and a mad dash through my busy day until I put the kids to bed. Then if I’m a very good girl and all my chores are done I can get to writing. I try to write about 1,000 words per night, but that’s not always possible. I generally get my second wind at night and type away into the wee hours, which means I sleep in the next morning only to be awoken by my kids with the next day’s disaster.

I love historical novels, especially ones that are more light-hearted. Currently I am enjoying reading Georgette Heyer, especially her regencies, though I also really enjoyed Simon the Coldheart which is a medieval of hers (not light-hearted but an interesting perspective on the era).

What was it like learning you were getting your book published? What has been your favorite part of the process?

When I first got the call that my book was being published I was probably more surprised than anyone. I had always heard how difficult that was, so I had not expected it. One of the best moments was when the book finally arrived and I was able to hold my paperback baby in my arms. Even better was being able to give a copy to those whose support and encouragement made it possible and give them my thanks!

What type of research did you do for the book?

Doing the research is really fun for me. There is so much now available on the web that it sometimes the hardest part is sifting through all the information. I started with a basic premise of the plot in my head, but then I needed to find the right historical setting for it. When I learned of the battle of Neville’s Cross and how the Graham clan was devastated in it, I knew I had found the right time. I also read a variety of writings from people who lived during the medieval period to get a feel for the mindset of the 14th century.

Do you have a favorite Highlander or Scotsman? If so, who?

I am inspired by the Scots persistence in fighting for their freedom from England, which was a dominant military power. The heroes of William Wallace or Robert the Bruce impress me with their willingness to put their life on the line to fight for that freedom. But my all time favorite Scot has got to be my husband!

What are 3 things that are "must haves" for you when you sit down to write a book?

I must have my computer, a glass of water (and preferably a snack), and silence. I know lots of writers write with a soundtrack, but I need to be able to hear my own music.

What is up next? Will The Highlander's Sword lead into a series?

I hope so! I have two more Scottish medievals set in the same time frame that are in the various processes of plotting, writing, and edits. We’ll see what happens!

Are there any real life people that have inspired the characters in your series?

My characters seem to come straight from my imagination, rather than based on a particular person. Although, each of my characters probably reveals an aspect of myself, either in reality or who I would like to be! 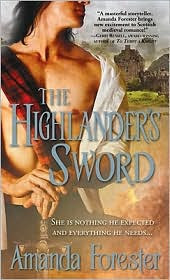 THE HIGHLANDER’S SWORD
BY AMANDA FORESTER
IN STORES MARCH 2010
A quiet, flame-haired beauty with secrets of her own...
Lady Aila Graham is destined for the convent, until her brother's death leaves her an heiress. Soon she is caught between hastily arranged marriage with a Highland warrior, the Abbot's insistence that she take her vows, the Scottish Laird who kidnaps her, and the traitor from within who betrays them all.

She's nothing he expected and everything he really needs...
Padyn MacLaren, a battled-hardened knight, returns home to the Highlands after years of fighting the English in France. MacLaren bears the physical scars of battle, but it is the deeper wounds of betrayal that have rocked his faith. Arriving with only a band of war-weary knights, MacLaren finds his land pillaged and his clan scattered. Determined to restore his clan, he sees Aila's fortune as the answer to his problems...but maybe it's the woman herself.

ABOUT THE AUTHOR
Amanda Forester holds a PhD in psychology and worked for many years in academia before discovering that writing historical romance novels was way more fun. She lives in the Pacific Northwest outside Tacoma, Washington with her husband, two energetic children, and one lazy dog. You can visit her at http://www.amandaforester.com/.


Thanks to Sourcebooks I have two copies of The Highlander's Sword to giveaway. To enter leave a comment along with your email address. Open to U.S. and Canada. Winners will be announced on March 14th.
at 12:02 AM