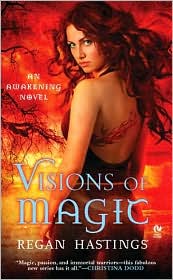 Summary: Once, witches were thought to be the stuff of legend, but then Shea Jameson’s aunt was discovered to be a true witch and burned at the stake, the first of many modern-day witches to suffer a fiery fate. With paranoia running high throughout the world, Shea has been haunted by the Magic Police and the Federal Bureau of Witchcraft. They’re looking for any sign that she, too, has powers. But she doesn’t! Or at least, she didn’t … until the day a dangerous man got too close.

Now, struggling with powers she can’t control, Shea runs for her life with Torin, an Eternal who swears he can keep her safe, if only she’ll give herself to him in a mating ritual older than time itself. But can she trust this would-be rescuer with her heart? And can she believe him when he insists that she is the only person who can save the world?

Thoughts: Imagine if the witch hysteria of old came back into practice and the witch hunting was an everyday thing and it was global.....

In Shea Jameson's world magic and witches are not fun and it's not something you dabble or flaunt. Shea lives in fear. Always running, always hiding. For 10 years this has been her way of life. Ever since her aunt was burned at the stake for being a witch. Now Shea learns that she has powers and is forced to run again. In that moment, the warrior Torin walks in, changing Shea's life forever.

Lately I have seen a lot of books with covers that have blown me away, but the story ends up falling flat. That is not the case with Visions of Magic. It has beautiful cover and a outstanding storyline. Shea and Torin's story is wonderfully paced, from the first scene to the last. Visions of Magic has a great energy and it pulls your right into the story. An enthralling tale and a fascinating concept. Ms. Hastings has created a scary and exciting new world, one that I look forward to visiting again.