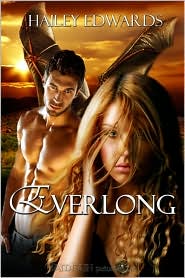 It's a pleasure to welcome Hailey Edwards to the blog.  Last March I got to review her book Everlong. Today she's here in celebration of the print release of Everlong.

Hi Hailey, Welcome to Anna's Book Blog! I'm glad to have you here. To start off can you tell the readers a little about yourself?
Thanks for having me, Anna. Let’s see. I’m a bookworm, and I supported a book-a-day habit before I started writing. If my nose isn’t stuck in a book, then you can usually find me baking or playing with power tools.

Everlong is your latest release, can you tell us a little about it?
Everlong is the story of an Askaran princess named Madelyn. She’s rescued from an abusive family and given a second chance at life among escaped slaves in a colony on earth. Along the way, she becomes less self-absorbed and more self-aware. She also discovers the difference between infatuation and true, abiding love.

What is your writing day like?
My day starts around noon. My husband’s work schedule means I’m up all hours of the night and have an unusual routine. I hit the social networking sites to make sure I’m up to date on everything happening out there in the real world, then I dive into the make believe. I write, or study writing, at least four hours out of every day.

When you’re not writing what kind of books do you like to read?
Right now, I read almost exclusively fantasy and paranormal romance. I only discovered the romance genre about three years ago, so I’m still making up for lost time. I do have a deep love for urban fantasy and first person narratives. Really, any contemporary fantasy is good for me.

What are 3 things that are "must haves" for you when you sit down to write a book?
My office! I bought a cute little netbook and can do nothing with the blasted thing. I have to be in my office, at my keyboard, to be productive. I also need white noise to block out my family (sorry guys). Last, I need a hand to hold. My critique partner, Cait, is always just an IM, text, or phone call away. She keeps me motivated and lets me know when I’ve gone too far or taken a wrong turn.

Since becoming published, what has been your favorite part of the process?
The best part of the actual publishing process is getting cover art. It’s like the icing on a cake. At that point, the book has been written, the edits are done, and now it’s time to see your novel dressed up to face the world.

There are so many talented cover artists out there, and it’s an amazing experience to see them translate your words into an image readers will identify with. Tuesday Dube created the cover for Everlong, and I couldn’t be happier with it.

What or Who inspired you the most when writing Everlong?
Cait and my friend Melanie were the two people cheering me on while I wrote Everlong. They both have so much more faith in me, and my writing, than I’ve ever had in myself.  Mel even sent me a little yarn Evanti demon. I got it in the mail the day before I got an email offer from Samhain. Harper Jr. is officially my good luck charm now.

If Everlong was being turned into a movie, who would be your choice of actors to play the lead characters?
Oh, wow. I have no idea. I don’t watch television often and rarely see a movie that isn’t a DreamWorks Animation production.

Are there any real life people that have inspired the characters in your series?
Yes. My friends and I have several running jokes about characters whose books have yet to be published. Their fascination with those characters keeps them alive for me.

What is up next? Is Everlong the first in a series?
I just wrapped up a new novel, Wicked Kin, about a fallen archangel turned soul harvester. The book is a twist on several creatures of heavenly origins and the hero’s decision between his duty to Hell and his love of a mortal woman whose soul he was sent to collect.

As for Everlong, I’m not sure that it will be the first in a series. There has been enough interest that I plan to write Harper’s side of the story eventually. I owe him that much.

The most damaged heart can fly with the right pair of wings.

Madelyn’s life is far from fairytale perfect. She is second in line for the throne of a corrupt, brutal monarchy. Or at least she was until her dark guardian sacrificed his life to hide her safely in a realm of infinite possibilities.

For years she’s lived among a colony of escaped slaves as her guardian’s widow. Even in this simple life, though, nothing is as it seems. Her hero kept a secret—a younger brother named Clayton Delaney. Warrior, winged demon…and the man who now wants to lay claim to her heart.

No longer cast in his brother’s shadow, Clayton meets all obstacles head on, including one named Maddie. His infatuation with her reaches the breaking point when she undergoes a royal rite of passage, going into heat and pushing them both over the edge.

Just as Maddie learns that some risks are worth taking, she discovers that her guardian may be alive. And she’s forced to make a choice between the man she’d thought she loved, and the demon willing to lend her his wings.


Warning: This book contains virginal angst, a hero who’s too nice for his own good, wings, claws, and convenient use of glamour. It contains heartbreaking loss, conversation with a woodland creature, and sweet, sweet demon loving.

GIVEAWAY:
Hailey is giving away a digital copy of Everlong to one lucky winner. To enter leave a comment along with your email address. Open to everyone, International too.  The winner will be announced on January 12th. Good Luck!
at 12:33 AM