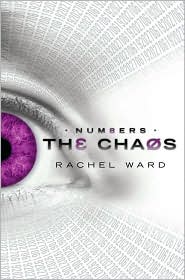 Summary: Adam has more than inherited his mother's curse: When he looks in someone's eyes, he not only sees the date of their death...he feels the searing, shocking pain of it. Since Jem died, Adam has lived by the sea with his great-grandmother, Val. But when rising tides flood the coast, they return to London.

The city is an alien, exciting, frightening place. Most disturbing of all, Adam can't help but clock how many people's numbers are in January 2027; how many are on New Year's Day. What chaos awaits the world? Can he and Sarah stop a catastrophe? Or are they, too, counted among the "twenty-sevens"?

Thoughts: Adam is Jem's son and she has passed on her curse to him.  Seventeen years has passed, Jem is dead and Adam has been living with his grandmother. When they go back into the city he is shocked to find that everyone's number is the same January 2027.  He knows something terrible is coming but doesn't know what, or if he'll be able to stop it.

The Chaos is just as creepy and unique as the first one.  I think having the curse would be scary and quite stressful. It was an good, intriguing read. Although I liked the first book a lot more. But really that has to do with characters. Jem was a great character, I loved her personality.  The ending of The Chaos was pretty intense. The curse just got turned up a notch... wonder where it's gonna lead.

I'm not sure if this series qualifies as a dystopian, but I think it is a bit. It's definitely futuristic. I would recommend this series to fans of either genre.  It's not one to miss.