Over the next few day I'm gonna be pretty quiet on all fronts, although I will still be checking my email. But I wanted to leave you with a fun post. It's been awhile since I did a Series Spotlight, so I thought I'd get back on track.  This month's spotlight is on The Maker's Song series by Adrian Phoenix. Great series. Love Dante, he is a great character. Make sure to check the giveaway at the bottom. :) 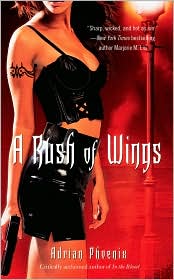 A Rush of Wings

HIS NAME IS DANTE.

Dark. Talented. Beautiful. Star of the rock
band Inferno. Rumored owner of the hot New Orleans nightspot Club Hell. Born of the Blood, then broken by an evil beyond imagination.

HIS PAST IS A MYSTERY.

F.B.I. Special Agent Heather Wallace has been tracking a sadistic serial murderer known as the Cross Country Killer, and the trail has led her to New Orleans, Club Hell, and Dante. But the dangerously attractive musician not only resists her investigation, he claims to be "nightkind": in other words, a vampire. Digging into his past for answers reveals little. A juvenile record a mile long. No social security number. No known birth date. In and out of foster homes for most of his life before being taken in by a man named Lucien DeNoir, who appears to guard mysteries of his own.

HIS FUTURE IS CHAOS.

What Heather does know about Dante is that something links him to the killer — and she's pretty sure that link makes him the CCK's next target. Heather must unravel the truth about this sensual, complicated, vulnerable young man — who, she begins to believe, may indeed be a vampire — in order to finally bring a killer to justice. But Dante's past holds a shocking, dangerous secret, and once it is revealed not even Heather will be able to protect him from his destiny.... 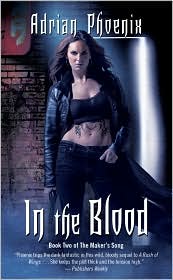 In the Blood
DANTE LIVES.

Vampire. Rock star. Begotten son of the fallen angel Lucien. Dante Baptiste still struggles with nightmares and seizures, searching for the truth about his past. It is a quest as seductive as his kiss, as uncontrollable as his thirst, and as unforgiving as his determination to protect one mortal woman at any cost.

FBI Special Agent Heather Wallace now knows the extent of the Bureau corruption that surrounds her, but worries she is losing the battle. And when Dante and his band Inferno come to Seattle on tour, Heather can't help but be drawn back to the beautiful, dangerous nightkind. But what Heather and Dante don't know is that new enemies lurk in the shadows, closer than they think...and even deadlier than they fear.

Shadowy government forces have pledged to eliminate all loose ends from Project Bad Seed — and Heather and Dante are at the top of the list. Elsewhere, the Fallen gather in Gehenna, intent on finding their long-awaited savior, the True Blood nightkind whom Lucien DeNoir would die to protect. And a damaged and desperate adversary, with powers as strange and perilous as Dante's own, plots to use Dante as a pawn in a violent scheme for revenge. But only one of these lethal forces holds the key to Dante's past — a key that could finally unlock the secret of his birth and the truth of his existence...or destroy him completely.

THE FATE OF THREE WORLDS...

The dark pieces of vampire rock star Dante Baptiste's past are violently emerging, and it is only a matter of time before the Fallen discover he is the creawdwr they have sought for thousands of years. The destruction he left behind in Oregon threatens to reveal his identity as Fallen Maker and True Blood, exposing the young nightkind to shadowy predators -- mortal and supernatural -- who will do whatever it takes to win his favor...or destroy him.

When beautiful FBI special agent Heather Wallace went AWOL on assignment, she chose irresistible Dante over the shady government forces that now stalk them both. Heather has her own secrets of the past to uncover, but she is also the only one who can hold her nightkind lover together when his dangerous quest for the truth threatens to send him over the edge. And as she and Dante fi ght for their survival, she realizes they must work together to protect their future -- before his mysterious destiny tears them apart.... 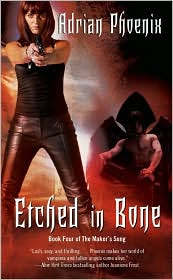 More beautiful and powerful than any creature the world has ever seen, Dante Baptiste has become the supreme target of the three worlds that spawned him. The mortal agents of the Shadow Branch have tried to control his mind through psychological torture. The vampire elders who guide nightkind society have plotted to use him in their bloodthirsty bid for power. And the Fallen have waited for millennia for Dante to claim his birthright as their Maker. But Dante belongs to no one—except the woman he loves. . . .

ONE PASSION SWORN IN BLOOD

Determined to face the Fallen and the world on his own terms, Dante hopes to piece together his shattered past and claim his future, with FBI agent Heather Wallace at his side. But in Heather’s human family awaits an unexpected enemy. One who could rip Heather from Dante’s heart and fill the holes with bullets. One who could force Dante to choose his darkest destiny—as the Great Destroyer. . . .


Learn more by checking out Adrian's website: http://adrianphoenix.com/
THE GIVEAWAY PORTION OF THIS GIVEAWAY IS NOW CLOSED.

GIVEAWAY:
I ended up with two copies of Etched In Bone, so I'm gonna give one copy away. To enter leave a comment along with your email address. This is open to US & Canada. The winner will be announced on July 10th. Good Luck!


EXTRA:
Adrian has been nice enough to offer a book to the giveaway too. The winner will get to pick a title for The Maker's Song. So, the prize will be Etched In Bone plus the winner's choice from the series.
at 12:09 AM