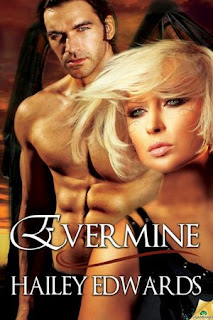 Summary:  He can be a slave to his past…or allow her love to free him.

There’s such a thing as too much change. Emma’s sister is mated. Revolution is brewing in her home realm. The last straw: her would-be mate is back from the dead and back under her skin—yet when it comes to the last five years, he’s not talking.

Desperate for a chance to start her own life, she answers the queen’s call to ensure equality for all of Askara’s newly freed slaves. It’s the perfect opportunity to escape a heartbreak in the making named Harper.

Harper loses a piece of his fractured soul when Emma walks away. His lies were meant to protect her from torturous years that drove him to the point of madness. Instead, when he comes to her a year later to help avert a crisis in a freed-slave community, the wedge those lies drove between them is firmly in place.

As their new lives collide with old wounds, they race to stop a threat that could not only destroy the queen, but send Harper back to the hell he escaped. Emma must decide if the man she still loves deserves equal rights to her heart.

Warning: This title contains torn pants, ripped gowns, and sand in uncomfortable places. It also includes one overcompensating villain, one gnarly priest, and two battered hearts willing to give this thing called love one last chance.

Thoughts: Fabulous read! Daughter of Askara is a wonderful world to read about with an incredible set of characters.  I enjoyed Evermine, which is the second book in the series.  Emma & Harper's journey was an interesting one. They are very likable couple but, I found myself frustrated with them. They are a couple with personal issues and relationship issues and both have a stubbornness that will make you want to tear your hair out.  Ms. Edwards winged-creatures are dominating, sexy and just plain fun to read about.  This series is a must read in my book.