I discovered this book a few months ago and have been eager to read it ever since. The cover is gorgeous! 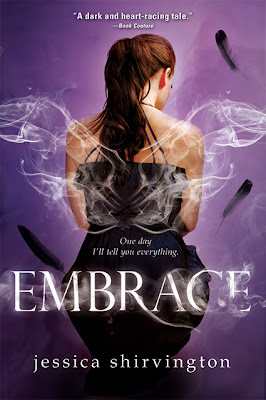 Title: Embrace
Series: The Violet Eden Chapters
Author: Jessica Shirvington
Release Date: March 6, 2012
Book Description:
It starts with a whisper: “It’s time for you to know who you are…”
Violet Eden dreads her seventeenth birthday. After all, it’s hard to get too excited about the day that marks the anniversary of your mother’s death. As if that wasn’t enough, disturbing dreams haunt her sleep and leave her with very real injuries. There’s a dark tattoo weaving its way up her arms that wasn’t there before.
Violet is determined to get some answers, but nothing could have prepared her for the truth. The guy she thought she could fall in love with has been keeping his identity a secret: he’s only half-human—oh, and same goes for her.
A centuries-old battle between fallen angels and the protectors of humanity has chosen its new warrior. It’s a fight Violet doesn’t want, but she lives her life by two rules: don’t run and don’t quit. When angels seek vengeance and humans are the warriors, you could do a lot worse than betting on Violet Eden…
The Violet Eden Chapters:
Embrace- March 6th
Enticed- September 2012
Emblazed- TBA
Endless- TBA
at 12:00 AM