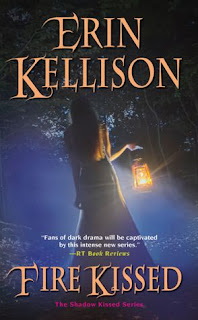 Summary:  Fae Fire... It is Kaye Brand's power to wield. But outcast from her kind, she's been selling herself to the highest bidder - money for her survival in exchange for a magic glimpse into the flames of the future.

Angel Ice...One of the angelic Order, Jack Bastian has no use for a female like Kaye, as provocative and unexpected as her blazing beauty. Yet he has no choice but to hire her to uncover the secrets of his sworn enemy and her former fiance, Ferrol Grey.

Magekind...War is inevitable between the defenders of the Order and the mage Houses who threaten to engulf the world in Shadow. For Jack, mage-born Kaye is off limits, no matter how hot the impossible attraction between them. But in the coming darkness, beset by danger and desire, everything is about to change...

Thoughts: Kaye Brand is a mage and her power is wielding fire. To survive she's been selling her powers - for the right price.  Jack Bastian wants nothing to do with the mage, but he's gonna need Kaye's help. Especially if he wants to take out Ferrol Grey, Kaye's one time fiance.

Fire Kissed is the first book in the Shadow Kissed series, a spin off of the Shadow series. If you enjoyed the Shadow books you won't want to miss this new one.

Excellent addition to the Shadowverse. I loved it. Kaye Brand and Jack Bastian make a great team. Kaye is a powerful character, especially with her fire power. But I really loved Jack. He is simply a delicious character. Fire Kissed is a wonderful read. Filled with shadow, mages and angels. Ms. Kellison writes beautifully dark stories that never fail to amaze me. I look forward to reading more of this new series.