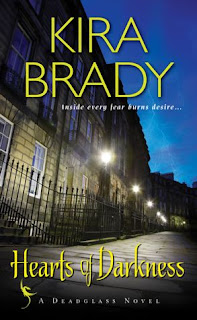 Summary:  In the first of a dazzling new romantic trilogy, one woman’s courageous search plunges her into a millennia-old supernatural war—and an irresistible passion…

Nurse Kayla Friday has dedicated her life to science and reason. But for her, Seattle is a place of eerie loss and fragmented, frightening memories. And now the only clue to her sister’s murder reveals a secret battle between two ancient mythologies…and puts Kayla in the sights of lethally-sexy werewolf mercenary Hart. He’ll do whatever it takes to obtain the key to the Gate of the Land of the Dead and free what’s left of his soul. But seducing the determined Kayla is putting them at the mercy of powerful desires neither can control. And as the clock ticks down to hellish catastrophe, the untested bond between Kayla and Hart may lead to the ultimate sacrifice.

Thoughts: Kayla Friday has flown to Seattle, to ID the body of her sister.  Being a nurse she knows most certainly that her sister didn't die of a drug overdose and is bound to find out what happened.  Werewolf,  Hart is on a mission to find the rest of his soul and what he needs he believes is in the the hands of Kayla.

Great read! The beginning was a bit slow for me, but it eventually picked up. I loved all the different mythologies this book included.  Kayla & Hart's journey wasn't an easy one, but I loved it all the same. I'm a sucker for HEA and this story had a great ending. The story reminded me a little of Moning's Fever series, which makes me think this book will definitely appeal to Fever fans. Especially considering our hero Hart, is one sexy werewolf.  This is Kira Brady's debut novel and she has done a smashing job with world building. Set in an alternate Seattle.... while I've read a lot of books set in Seattle, stepping into Brady's Seattle felt gritty and dark, but also new and fresh at the same time.

Hearts of Darkness is an engrossing read, filled with shifters, ghosts and magic. A story that both paranormal romance and urban fantasy readers will want to devour.