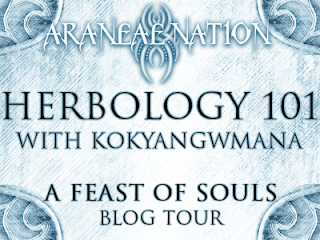 
While writing A Feast of Souls, I researched herb lore because the heroine, Mana, is a spirit walker. In the Araneae world, that makes her a spiritual leader for her clan, one who can walk in between worlds and aid in healing from the spiritual plane. Mana also studies herbology. Though her clan uses a specific plant for healing, the dayflower, which doesn’t exist, I wanted its abilities based on actual plants.

For example, I wanted the dayflower to have antibiotic properties. So I turned to oregano.

So my question is this—have you ever tried a home remedy or herbal cure? If so, did it work for you? Leave a comment to let me know and you’ll be entered to win your choice of title from my backlist in any digital format and an Araneae swag pack. Contest is open internationally.


A Feast of Souls Excerpt

“Are you ready?” Vaughn walked so close, heat from his body sizzled against my skin.
Static crackled across my arms and raised hairs all over my body. The veil. We had arrived. I was so grateful for a respite I hadn’t checked the reason why our procession had come to an end.
Shadows darkened Vaughn’s eyes. I imagined the wheel of his mind spinning. “Are you?”
His exhale sounded strained. “I am.” He cast me a calculating glance. “Kiss me for luck?”
I almost swallowed my tongue. “What?” My mind had wandered but not so far from its path.
“Kiss me.” His eyes gleamed brighter than they had since our ordeal began. “It’s tradition for a male to seek a female’s kiss before crossing the veil. Gives him a reason to fight its energy.”
“Really?” I made my voice sound thoughtful. “All these years I’ve broken tradition without realizing. Old Father never mentioned such a noble cause, nor did my other travel companions.”
His nod was somber. “Wait—what do you mean other travel companions?”
“Old Father rarely leaves Beltania these days, even for clan business. When I leave the city, my aunt assigns one of her husband’s clansmen to act as my guard. Deinopidae males are rather physical males. You’d think I’d have tempted one…” I sighed. “Consider the kisses I’ve missed.”
I have gone mad. The strain of capture has taken its toll. Think of who I’m tempting. Think of whose attentions I’m inviting. Think of those soft lips of his. One last chance to taste them…
Tonight we fought for our freedom. If we lost…I wanted to know this male’s kiss.
Vaughn cleared his throat. “We could make up for lost time.”
“You’d do that, for me?” My smile was impossible to stop. I should be afraid—of him, of this night, of the outcome of two bound prisoners against a score of Theridiidae. “How kind you are.”
But I wasn’t afraid. Vaughn’s presence enveloped me, kept me safe against all odds. My skin tightened and my head ached as I was forced to consider perhaps it had never been him I feared, but his effect on me. Tradition demanded I save myself for my soul mate. My heart, well, it was less inclined to wait. With no visible aura and no possible future, I gave myself to this moment.
Vaughn closed the distance between us. “This is not the first kiss you deserve.”
“Who said this was my first?” 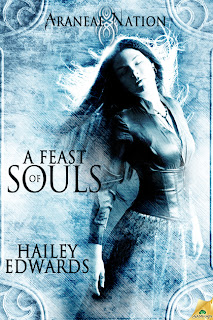 A Feast of Souls
Araneae Nation, Book 2
By Hailey Edwards

The only way to save her is to bind their souls as one.

Born with the ability to communicate with the dead, few things take Mana by surprise. But when a canis lopes into her life, announcing himself as the long-dead father of a childhood friend, she’s shocked. To make matters worse, he has a dire message that she alone can deliver.

Now Mana must face Vaughn, the male who inspired one too many girlish fantasies, and impart the spirit’s message—without acknowledging her source—so the soul can be laid to rest.

With rumors of a burgeoning clan war setting his nerves on edge, the last thing Vaughn needs is for an innocent to get caught in the crosshairs. But the woman he remembers as an awkward girl refuses to leave his side until he’s heard her out. That’s not the only change in her that calls to him. Her kindness soothes his battle-scarred soul—and he craves her in ways a warrior shouldn’t.

When they are both captured, they learn of an even greater threat. The plague devastating the southlands has come to his clan home. And his best—and only—chance to keep his people alive is the female who walks among the dead.

Warning: This book contains one fierce hero with a nose for danger, one stubborn heroine who smells like trouble, and one wolfish spirit who makes most relationships with the in-laws seem downright tame. Fur, fangs and some biting should be expected. But never fear, the hero has a sword, and he knows how to use it.

Thanks to Hailey I have a Araneae Swag Pack to giveaway along with the winner's choice of a book. To enter leave a comment along with your email address. International giveaway, so that means everyone can enter. The winner will be announced on December 22nd. Good Luck!