Hi Alex, Welcome to Anna's Book Blog! To start off can you tell the readers a little about yourself? (waves) Hi, I’m Alex Hughes. I’m a foodie, a book nerd, a science geek, and I like dancing, scifi, and hamsters. I write books and sometimes people read them.

Sharp is your latest release, can you tells us a little about it and the series? Sharp is the second in the Mindspace Investigations series, which features a telepath and recovering addict helping the police in future Atlanta solve crimes. In the first book, they’re tracking a serial killer who kills with the mind. In the second, they’re tracking the man who killed one of Adam’s old students and also missing Tech parts all over the city.

What is your writing day like? I laugh, because I’m a free-spirited creative person trying to masquerade as a ordered professional. I get up at a regular time, and I sit down at the keyboard to write at a particular scheduled time, and I try to trick my brain into making progress on the latest story. Most of the time this works, but panic, distraction, and rabbit trails seem to be part of the process as well. Picture House; he’s working on the problem, yes, but sometimes he needs to throw the ball and watch soap operas to get to the answer. That can be me as well. When I get the answer, though, I’m happy to spend serious keyboard time getting it out.

When your not writing what kind of books do you like to read? What do I not like to read? I’ve probably read something in almost every fiction genre. In terms of nonfiction, I like doctor books, particularly neuroscience, these days, and weird obscure cool history. I was a history major, and can’t help but keep reading about some of it. I just bought a book on the Ottoman Empire--hopefully the writer includes lots of interesting stories :)

What are 3 things that are "must haves" for you when you sit down to write a book? (1) an idea, (2) a cup of coffee, and (3) quiet. Sometimes I add music to the last, but often I work to total silence. I find focus helps me more than anything else.

If you could give your lead characters one piece of advice, what would it be? You don’t have to know everything, and you’ll make mistakes. That’s okay.

What inspired you the most when writing Sharp? Seeing the characters develop as people as they embraced new challenges and new problems. It’s also fun seeing Adam’s past flesh out as we learn more about him. I’m a few steps ahead of the game, but I’m learning about my characters as you the readers are, one step at a time.

If you could cast your hero, which actor would you pick? In the past I’ve said Benedict Cumberbatch (Sherlock from BBC’s Sherlock) as he can make a difficult character still likeable, but lately I’d like to see David Tennant audition for the part. It might come down to who can manage the American accent!

Since becoming published, what has been your favorite part of the process? Without question, hearing the auditions for the audio books (now out). There’s something incredible about hearing your words read by a professional actor that makes it all real.

If you can, tell us what is up next for you? I’m working on books three and four now, and working on ideas for other characters in other worlds. We’ll see where the future takes me, but I’m excited to see it! 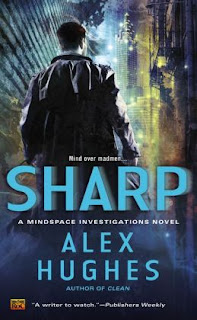 HISTORY HAS A WAY OF REPEATING ITSELF, EVEN FOR TELEPATHS.…

As a Level Eight telepath, I am the best police interrogator in the department. But I’m not a cop—I never will be—and my only friend on the force, Homicide Detective Isabella Cherabino, is avoiding me because of a telepathic link I created by accident.

And I might not even be an interrogator for much longer. Our boss says unless I pull out a miracle, I’ll be gone before Christmas. I need this job, damn it. It’s the only thing keeping me sane.

Parts for illegal Tech—the same parts used to bring the world to its knees in the Tech Wars sixty years ago—are being hijacked all over the city. Plus Cherbino's longtime nemesis, a cop killer, has resurfaced with a vengeance. If I can stay alive long enough, I just might be able to prove my worth, once and for all...

About the Author
Alex has written since early childhood, and loves great stories in any form including scifi, fantasy, and mystery. Over the years, she has lived in many neighborhoods of the sprawling metro Atlanta area, including Decatur, the neighborhood on which Clean is centered. Her work is dark, complex, action-filled and a little funny. Her Mindspace Investigations series has been called "A fun blend of Chinatown and Blade Runner" by James Knapp, and Publisher's Weekly called her "a writer to watch."

When not writing you can find Alex in the kitchen cooking gourmet Italian food, watching hours of police procedural dramas, and humming to delightfully obscure music.

GIVEAWAY
Thanks to Alex I have a copy of Clean (Book 1) to giveaway.  To enter leave a comment along with email address. Open to U.S. residents. The winner will be announced on April 17th. Good Luck!