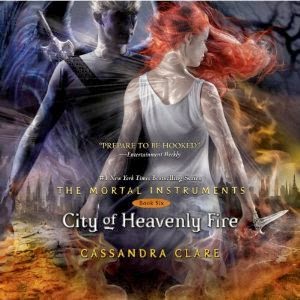 I received this title from Simon & Schuster Audio, in exchange for an honest review.

Summary:
Black for hunting through the night
For death and mourning the color's white
Gold for a bride in her wedding gown
And red to call enchantment down
-Shadowhunter Children's Rhyme

Sebastian Morgenstern is on the move, systematically turning Shadowhunter against Shadowhunter.  Bearing the Infernal Cup, he transforms Shadowhunters into creatures out of nightmare, tearing apart families and lovers as the ranks of his Endarkened army swell.

The embattled Shadowhunters withdraw to Idris--but not even the famed demon towers of Alicante can keep Sebastian at bay. And with the Nephilim trapped in Idris, who will guard the world against demons?

When one of the greatest betrayals the Nephilim have ever known is revealed, Clary, Jace, Isabelle, Simon & Alec must flee--even if their journey takes them deep into the demon realms, where no Shadowhunter has set foot, and from which no human has ever returned...

**If you haven't read any of the books in this series, my review could contain spoilers.**

Thoughts: Sebastian Morgenstern (Clary's brother) is using the Infernal Cup to change Shadowhunters in to dark creatures. Clary & Jace along with the rest of the gang aim to fight to the last. They must or all will be lost.

It was an good read. The first few chapters of the book were a bit slow. There seemed to be a lot of waiting around for action and for the clave to make a decision.  I enjoyed revisiting Clary, Jace, Isabelle, Simon & Alec one last time. But I got bored with Sebastian real fast. At 725 pages or in my case 17 discs I thought it would never conclude, but in the end I felt it worth it. I thought it was wrapped up very nicely and with a very satisfying ending.

City of Heavenly Fire is narrated by Jason Dorhing (Veronica Mars) and Sophie Turner (Game of Thrones). I'm a little partial to Molly Quinn (who narrated previous audios in this series), but I enjoyed these two as well.