Urban Fantasy - Noir, Horror, and the Literature of Hidden Worlds

Here’s an exercise: Imagine a world that coexists with ours invisibly. It has somehow, by design or neglect, fallen down in the cracks of regular society, where its denizens—possessed of strange capabilities and often dubious morality—can work their mischief out of sight of most of humanity. Where they rub up against regular folks, conflict abounds.

That description pretty accurately lays out the setting for countless urban fantasy novels. Vampires living in plain sight, creatures of the fae trying to get by waiting tables and keeping their heads down, all manner of terrible and sometimes wondrous worlds existing entwined with our own. These are staples of the genre, so deeply-rooted at this point that they are accepted as routine.

A funny thing, though: I never said anything about magic. The same description in the first paragraph above could easily apply to the setting of a hard boiled crime or detective novel. Just slot a criminal underworld in place of the magical one. Gangsters instead of vampires. Both inhabit a murky between-world that would greatly prefer to stay out of sight and ply its influence behind the scenes.

It’s probably no wonder then, that urban fantasy is thick with the stylistic markers of noir and hard boiled fiction. The jaded detective who travels a seamy underworld nobody else can—is that Philip Marlowe, Harry Dresden, or October Daye? Hardened enforcer for organized crime—Luca Brasi, or Chuck Wendig’s Mookie Pearl?

Urban fantasy and hard boiled fiction live comfortably together in what I think of as the literature of hidden worlds. Both hold out the possibility that your worst fears are true—that malign forces are moving invisibly behind “regular” society, warping it to their own terrible ends.

Which brings us to a third point of the hidden world triumvirate—horror. I tend to think of horror as not so much a genre as an effect, but regardless, those hidden worlds lend themselves to horror as much as anything else. The nature of the hidden is to be mysterious and, as a result, often threatening, and the tropes and devices used to create horror are thick with hidden worlds. The vampire and the werewolf, let’s remember, were horror icons long before this thing we call urban fantasy incarnated. Both were terrible monsters that could pass for human, hiding terrible, destructive secrets.

It makes sense that the hidden worlds of hard boiled fiction and horror have been raided liberally and put to use in urban fantasy. They traffic in the same darkness. It’s almost like wish fulfillment in some sense: “Oh, this is why everything is so screwed up!” Get it out there on the page, where it feels like you’ve got a handle on it.

Given the similarities between the three, and urban fantasy’s heavy duty hard boiled and horror influences, the tonal differences are interesting. Despite borrowing many hard boiled markers (a wisecracking, world-weary, first-person narrator chief among them), a lot of urban fantasy tends to be a somewhat lighter in tone than noir or crime fiction. I think it can get away with this because the metaphor is a step removed from reality—vampires, you see, not loan sharks. Nothing that might actually be happening right down the street. Similarly, the lurking monsters of horror have been changed subtly, so that instead of incarnations of subconscious terror, they often become fantastic monsters to be bested.

Urban fantasy also holds out the hope that not all of what is hidden is terrible. Somewhere, lurking back in those shadows, is a magic trick or a down-and-out angel or a well-meaning werewolf to help fight the good fight. It’s a nice thought.

When I wrote Premonitions, I had all three genres in mind. I read them all, obsessively, because as much dread as there is in the hidden, the mystery begets fascination as well. Urban fantasy, since it to some extent incorporates the other two, was the natural place to start. I wanted to write about machinations, skulking, and awful happenings going down in places you don’t see on your way to work in the morning. To wade into an entire occult underworld that entwined itself intimately with a criminal underworld, and see what lived down there.

Karyn Ames, the main character of the novel, ended up entering her hidden world the same way many denizens of those places do—desperation, combined with a sort of curse. She sees the future in hallucinations, symbolic and literal, overlaid on and often indistinguishable from reality, and the only way to keep them from drowning her perception of the real world is by taking an expensive, rare black market concoction. One of the cool things about Karyn’s character is that it allowed me to bring all three of my hidden worlds together. Her constant need for cash has led her to an odd criminal career, working with her crew to steal bizarre objects of ostensible occult power—a neat intersection that plants her squarely at the crossroads of the book’s occult and criminal underworlds. Her visions themselves supply plenty of horror, both the immediate, visceral horror of some of the terrible things she sees, and the constant looming threat of insanity.

At first glance, crime, horror, and urban fantasy might seem like odd bedfellows, but I think you don’t have to look very hard to see the dark undercurrents that connect the three different kinds of hidden worlds. In any case, I had a hell of a lot of fun putting them all in the same book. 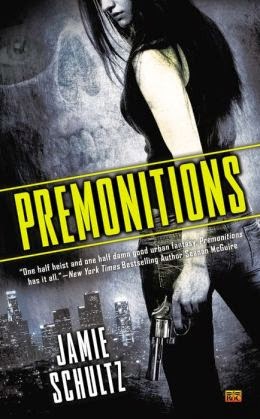 It’s the kind of score Karyn Ames has always dreamed of—enough to set her crew up pretty well and, more important, enough to keep her safely stocked on a very rare, very expensive black market drug. Without it, Karyn hallucinates slices of the future until they totally overwhelm her, leaving her unable to distinguish the present from the mess of certainties and possibilities yet to come.

The client behind the heist is Enoch Sobell, a notorious crime lord with a reputation for being ruthless and exacting—and a purported practitioner of dark magic. Sobell is almost certainly condemned to Hell for a magically extended lifetime full of shady dealings. Once you’re in business with him, there’s no backing out.

Karyn and her associates are used to the supernatural and the occult, but their target is more than just the usual family heirloom or cursed necklace. It’s a piece of something larger. Something sinister. Karyn’s crew and even Sobell himself are about to find out just how powerful it is… and how powerful it may yet become.