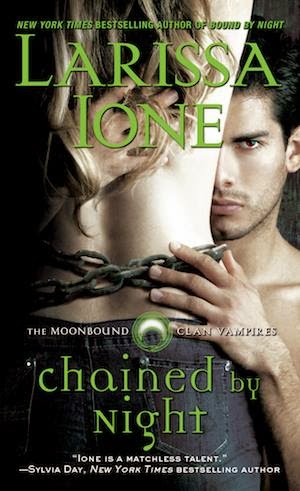 I received this book from Simon & Schuster, in exchange for an honest review.

Summary:  THE FUTURE OF HIS TRIBE

Leader of the vampire clan MoonBound, Hunter will do what he must to save his people from extinction—or worse, a torturous eternity as vampire slaves and subjects of human experimentation. To keep his enemies at bay, he has agreed to mate a rival clan leader’s daughter in return for peace between the clans and an ally in the looming war with the humans.

THE LOVER OF HIS SOUL

But survival comes at a price. First, Hunter must break an ancient curse by successfully negotiating three deadly tests. Then he must resist the searing passions of the gorgeous vampire warrior he despises but is bound to mate. Will Hunter stay true to his word? Or will he risk everything for the woman he really loves: the vampire seductress’s identical twin sister?

Thoughts: I sucked down (pun intended) the first book and couldn't wait to read this one. I loved book 2 even more than the first. Hunter & Aylin's chemistry was amazing. From their first interaction I was eager to read more scenes with them. While Rasha on the other hand... well lets just say if I had a list of characters I'd like to smack, Rasha would be at the top of the list.  Larissa Ione is a master of seduction. She pulls you in and does not let go. This series/book is definitely a must.  I  know some might think that vampire books and paranormal romances are dying or dead, but I tell you the genre is alive and well!