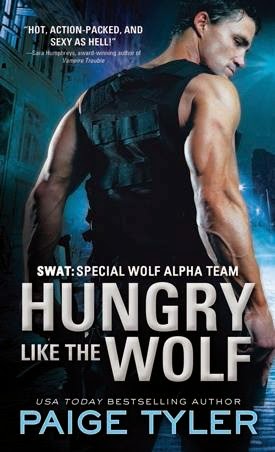 Summary:
THEY'RE TIGHT
THEY'RE ON TARGET.
THEY'RE AS ALPHA AS MEN CAN GET

The Dallas SWAT team is hiding on helluva secret... they're a pack of wolf shifters.

The team of elite sharpshooters is ultra-secretive--and they're also the darlings of Dallas. This doesn't sit well with investigative journalist Mackenzie Stone. They must be hiding something...and she's determined to find out what.

Keeping Mac at a distance proves impossible for SWAT team commander Gage Dixon. She's smart, sexy, and makes him feel alive for the first time in years. But she's getting dangerously close to the truth--and perilously close to his heart.

Thoughts: Good read! Gage and the guys were my favorite part of the book. Definitely a great beginning to a new series. If you love series like Lords of the Underworld or Black Dagger Brotherhood you will love this Special Wolf Alpha Team.  Hungry Like the Wolf is action filled, with an exciting plot. Gage and Mac make a great pair. I wasn't a big fan of Mac's at the beginning, but she grew on me. Shifter fans won't want to miss this one.