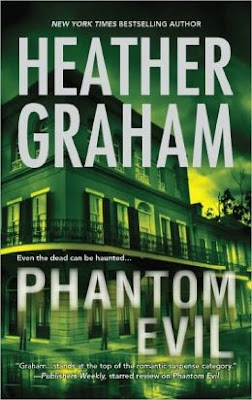 Summary:  A secret government unit, a group of renegade paranormal investigators... and a murder no one else can crack.

Though haunted by the recent deaths of two teammates, Jackson Crow knows that the living commit the most heinous crimes.

A police officer utilizing her paranormal intuition, Angela Hawkins already has her hands full of mystery and bloodshed.

But one assignment calls to them too strongly to resist. In a historic mansion in New Orleans's French Quarter, a senator's wife falls to her death. Most think she jumped; some say she was pushed. And yet others believe she was beckoned by the ghostly spirits inhabiting the house — once the site of a serial killer's grisly work.

In this seemingly unsolvable case, only one thing is certain: whether supernatural or all too human, crimes of passion will cast Jackson and Angela into danger of losing their lives... and their immortal souls.

Thoughts: Heather Graham has been on my authors to read list for a long time now. I wish I would have started earlier than I did. Phantom Evil is an excellent story. It's a wonderful mixture of paranormal, romance and mystery. I admit the "secret government unit" almost put me off, but the Krewe  is exciting mix of people. I look forward to reading more of the books.  I definitely recommend this one. I know some people might be put off by how many books are in the series, but just by reading the first book - I can see it's gonna be worth it.

Krewe of Hunters:
Phantom Evil
Heart of Evil
Sacred Evil
The Evil Inside
The Unseen
The Unholy
The Unspoken
The Uninvited
The Night Is Watching
The Night Is Alive
The Night Is Forever
The Cursed
The Hexed
The Betrayed
When Irish Eyes Are Haunting
The Silenced - June 30, 2015
The Forgotten- July 28, 2015
The Hidden- September 29, 2015
All Hallows Eve- October 27, 2015
at 10:00 AM