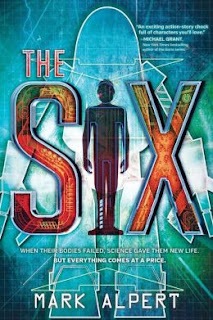 The Six
By Mark Alpert

Adam’s muscular dystrophy has taken his motility, his friends, and in a few short years, it will take his life. He takes solace in playing video games he’s programmed to reflect the life that he used to have. Virtual reality is the one realm where he can be the hero, and it’s where he chooses to spend his time, until an entity called Sigma tries to kill him.

A dangerously advanced artificial intelligence program created by Adam’s computer-genius father, Sigma has escaped its cyber prison and is threatening global destruction and domination. But Adam’s father has a plan. He will stop Sigma by using the technology he developed to digitally preserve the mind of his dying son.

Adam’s consciousness is uploaded into the body of a weaponized robot, along with a group of five other gifted teens who are terminally ill. Together, they must learn how to manipulate their new mechanical forms and prepare for combat before Sigma destroys humanity. Adam can finally play the hero for real, but will his new body be worth the sacrifice of his human existence?

This innovative and thought-provoking young adult debut, from the critically acclaimed author of adult thrillers Final Theory and The Omega Theory, questions what it means to be human and whether we are destined to be defined by our physical bodies or our intellect.


About Author:
Mark Alpert is a former editor at Scientific American, and the author of several adult thrillers. He’s been praised by Douglas Preston as the “heir to Michael Crichton.” Visit Mark online at markalpert.com.
Website | Twitter | Facebook


GIVEAWAY
a Rafflecopter giveaway
at 8:00 AM