One of the things I love most about writing contemporary novels is the ability to explore different careers and jobs I’ve never worked before. While some folks work the nine to five so they can enjoy other aspects of their lives, other people tie their careers in with their identity. So when I began writing Captured Memories, I decided to write two characters with distinctive and demanding career paths, but of course a little offbeat like themselves.

For the hero of the novel, Zane Parata, being a chef was only natural. The man’s an ex-con, so his career options are limited, and having worked at restaurants before, I’m familiar with how chefs operate in the back of house. I also loved the passion for cooking that cropped up with his character due to that connection.

As for the heroine, Liv Morozov, she ended up being a photographer. I have several friends who are, and I love seeing the unique perspective and artistry that comes with the craft. Liv funnels all of that creativity into her work as well, creating two driven individuals, despite their personal demons.

Choosing careers for the two of them wasn’t just a blind choice though. I went with professions that fit the characters best, and those elements should be considered whenever you’re creating backstories. For example, Liv had this sort of artsy, spunky vibe that would be hard to pop into a business suit and throw on regular hours, and Zane’s rough and tumble, tattooed exterior and jaded past seemed the perfect fit for the loudmouths back in the kitchen.

There’s a myriad of professions out there, from lawyers to deep sea divers, and one of the wonderful parts of writing is the excitement of exploring them through your characters. So next time you pick up the pen and create a new character, make sure you don’t forget the importance of their career and how it can enhance or accent personality. 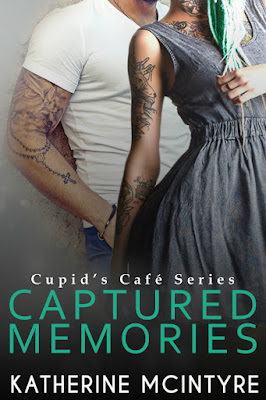 An invitation to Cupid’s Café will change your life.

After the incident that caused Liv Morozov to drop out of college, years later she’s still trying to pick up the pieces of her life. She’s managed to carve out a career for herself as a photographer, but when it comes to guys? Her issues send them running for the hills, every damn time.

Zane Parata has declared himself off-limits for relationships. Between trying to maintain sobriety and the long hours he works as a chef, no one wants to deal with his brand of damage, and he wouldn’t want to burden them in the first place.

When Liv shows up at Cupid’s Café, she never expected to find Zane, her brother’s former best friend who had vanished one day and never returned. The sparks that surged when they were both teens rekindle stronger than ever, and all too fast, Liv and Zane entangle in each other’s lives, breaking their own rules. Except with both struggling with the demons from their past, the love that’s begun to grow is one lapse away from shattering the two of them beyond repair.

The date started as bland and was speeding right along to abysmal.

Liv sucked on her straw, taking in an extra hefty helping of her black-and-white milkshake, as if the creamy goodness could block out the absolute drivel coming out of this guy’s mouth. He hadn’t seemed like this much of a twat online, but hey, dating profiles lie. The overhead lights of the Denny’s blared down on her, and the rattle and chill of air conditioning blasting through this place made her skin prickle.

“So you take photographs, right?” Kyle asked, his smarmy grin the sort kind she itched to punch off his face, and the Drakkar Noir he’d slathered on making her stomach churn. “What’s your real job?”

Liv swigged so much milkshake it went straight to her head, but even brain freeze melted in the fury his question inspired. So far he checked off every item on her ‘Shit that Makes Liv Morozov Rage’ list. Acting like her career wasn’t a legitimate profession tended to top that, along with the territorial way he leaned forward, his hand inching across the laminate table as the minutes wore on.

“Professional Emasculator. I’ve been told that’s why I’ve got such a problem keeping a man,” she drawled, batting her eyelashes innocently while the venom poured from her mouth. This had been a bad idea from the start, spurred on by the promise she made to Tessa to give the dating pool a fair try again. Common sense-wise, making connections she might be able to use for her quite-real job as a photographer didn’t hurt, and she figured she could slice through any assholes who came her way.
Looked like right off the bat they lined up for the slaughter.

This was a terrible plan.

Liv applied cherry red lipstick in her rearview mirror with the precision of experience, her brand of war paint to give her confidence today. By some miracle, a hangover hadn’t chased her into Tuesday, after the amount of whisky they swilled last night. She had needed all the liquid courage possible following her miserable date with Kyle-the-douche and the way the thought of today sent her into freak-out mode.

Still, she smoothed the surface of her navy blue cigarette pants and took a deep inhale. Her Converse might not be as stylish as a pair of pumps, but if she needed to move fast, she’d be able to bolt at a moment’s notice. She might feel safe sitting behind the wheel of her Subaru, but the idea of walking down Bardstown towards this café made her heart step in double time.

She tugged her black leather jacket from the back seat, more a security blanket than any sort of needed warmth since the temperature would climb with the hours. Liv refused to go anywhere without it even though the jacket had accumulated more patches and holes than was worth keeping. Ten years later, and she had never been able to let him go—not completely. He and this jacket remained in her memories as a reminder of a better time, before college had happened and she turned into this jaded mess.

Liv got out of the car.

This time of day on a Saturday, Bardstown Street exploded into full swing with traffic flowing on both sides, engines revving and tires whirring. Crowds mobbed the sidewalks, mostly folks of the bespectacled hipster variety, with which she tended to blend in well. Even though the sun beat down on her with a fiery insistence, she slipped her leather jacket on and made her way towards Cupid’s Café.

Tweet: A visit to Cupid's Cafe will change your life. Join Liv and Zane in Captured Memories! #rockabilly #romance

Katherine McIntyre is a feisty Irish chick with a big attitude despite her short stature. She writes stories featuring snarky women, ragtag crews, and men with bad attitudes—high chance for a passionate speech thrown into the mix. As an eternal geek and tomboy who’s always stepped to her own beat, she’s made it her mission to write stories that represent the broad spectrum of people out there, from different cultures and races to all varieties of men and women. Easily distracted by cats and sugar.