Out Today!! Vampire God by Rosemary A Johns 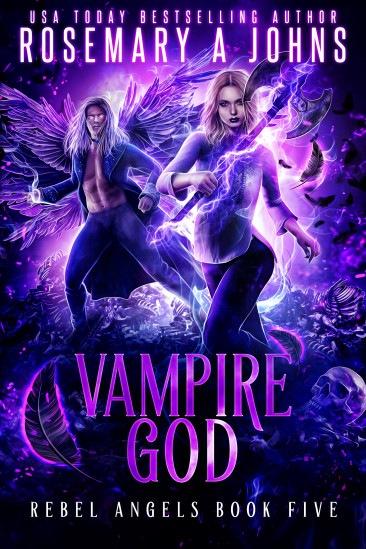 Are you ready for the final battle between the angels and vampires in VAMPIRE GOD? With the release of the grand finale, binge read the complete and addictive #1 bestselling urban fantasy/paranormal romance series REBEL ANGELS by USAT Bestselling author Rosemary A Johns! It contains epic battles, steamy love scenes, magic, vampires, angels, shifters, and a badass heroine. Dive into the action-packed magical ride with irresistible vampire and angel lovers and a supernatural world like you’ve never seen it before…and binge read your next series on Kindle Unlimited! #WorshipTheVampireGod

Download here and prepare to dive into the land of gods and monsters…
http://viewbook.at/VampireGod

In the realm of the gods, the final game for the Crown has begun. Violet is running out of time. In a court of godly angelic Seraphim, the only way to survive the trickery and secrets of The Burning Temple is to seduce the despotic Emperor’s sultry shifter son. Yet is he as much a prisoner as her in his Gilded Cage? Violet must undertake the Test by Monster to become a bodyguard to the Emperor: a Fae Knight of the Seraphim. If she fails, her vampire and angel lovers will be tossed into the Abyss. At last, Violet meets her creator, and the dangerous truth is revealed… When the Emperor threatens to wipe out every world and start a new Eden, time is up. In the final battle, Violet could lose everything.

The angel dragged me close, whispering into my ear, “Trust me, and I shall worship you.” I gasped, drawing back. Gabriel’s eyes lit with painful hope. “Take my Crown, body, soul—” “I don’t want a slave.” I shoved him against the wall. My godlike powers burnt bright at Gabriel’s temptation: to claim an Archduke and future Emperor, just as his rich amber scent begged me to stroke the distressed sparks on his feathers and cherish him, rather than force him to his knees, whilst he worshipped me. Gabriel cocked his head. “Then rule with me.” My eyes widened.  He wanted me to be the future Empress?

“Help me survive in this deadly realm and you’ll have my trust. I don’t need to take anything from you.“But what if I willingly give it?” Gabriel slipped his arm back around my waist, kissing my jaw.
His magic sizzled from his lips in a tingling line: I gasped, juddering into his hold.
Here was love, not slavish worship. I desired more…to claim him: Crown, body and soul…

Winner of the Silver Award in the National Wishing Shelf Book Awards.

A music fanatic and paranormal anti-hero addict, Rosemary is also a traditionally published short story writer. She studied history at Oxford University and ran her own theatre company. She’s always been a rebel…

Sign up for Rosemary A Johns' VIP Newsletter and receive the free story  "All the Tin Soldiers",
plus news of hot releases and promotions: https://mailchi.mp/rosemaryajohns/subscribe-rebel-newsletter

You can visit Rosemary A Johns online at her fantasy website: https://rosemaryajohns.com