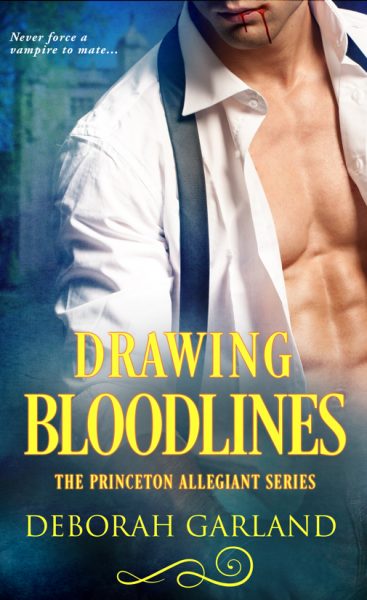 HE WON’T
Dr. Alexander Manning has drawn too much blood from his beautiful patient. Overwhelmed with thirst for her, he drinks it immediately. But when she catches him and passes out, he must report what happened to his allegiant’s Commander. Or…he can deal with her himself. When he breaks into her house and enters her bedroom to wipe the incident from her mind, he reads her thoughts first. She wants him as much as he wants her.

BE DRAWN IN
Elizabeth Lockspier discovers the man she’s so drawn to is a vampire and fears for her safety and the well-being of her daughter. When Alexander tracks her down and assures her she’s in no danger and then kisses her, making her feel like the world has slid off its axis, she has to make a choice. Turn him away. Play it safe. Deny how she feels. Or…take a risk where the reward is night after night of blinding ecstasy.

WITHOUT A FIGHT
But Alex’s past catches up to him when the new Philadelphia Commander chooses Alex to be her mate. He must decide…go obediently into the arms of the woman who blackmailed him into years of sex. Or…fight back. With some magical powers he’s been keeping a secret or with a little science experiment a colleague is cooking up in a private research facility.

After a set of passing headlights from the street below moves across Elizabeth's bedroom, I step inside. Her bed faces two tall windows covered in delicate floor-length drapes that probably billow softly in summer breezes. My back straightens, stiff and rigid when I see her slender sleeping body, fully clothed, laid out over the covers—a sign of extreme exhaustion. I don’t sense any lingering fear, however.

A soft step closer, I notice she’s wearing the skirt and blouse from earlier today. My scent must still cling to the fabric.

Her hair cascades off the side of the bed like a golden waterfall. It wears away my resolve and draws me closer to her.

Against my better judgement, I reach out to touch the soft, silky strands. What must it feel like to be twisted around my fingers while I’m behind her, her ass pressed firmly up against me? The thought of what is underneath her skirt makes my cock throb.