Today I'm happy to have Teresa D'Amario as my guest. I'm the latest stop in her blog tour for her release Lone Wolf, book 2 in the Maxey Wizards series. This post is a bit different then other guest posts. In this one you the commenter will get to participate. Teresa needs your help with a short story. Keep reading to learn more and Enjoy!! 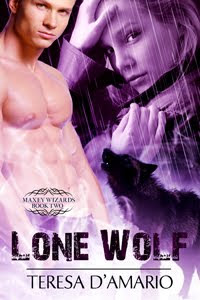 Once the victim of scientific experimentation by the Government Control of Supernatural Activities (GSA), Damon doesn't have a past, and he isn't sure he has a future. He doesn't even know if his ability to change from human to wolf is a virus, or magick. But the instant he lays eyes on the pretty cop from the local police force, he knows he has to learn the secrets of his past before they destroy her future.

Krystal is the best animal cop on the police force, hiding magickal talent beneath layers of excuses and quick thinking. For five years she's tracked Peter Burke, a butcher who steals any form of canine to supplement his dietary needs. The day she saves a wolf from losing his head at the sharp end of an axe, her entire life changes. And then there is Damon, the mysterious, sexy ex-soldier with no memory of his past who awakens fantasies of dark and sensual nights.

But the GSA isn't finished with Damon, and when the shadowy government agency joins forces with Burke, Krystal too finds her life in jeopardy, the target of men and women led by their own desires. Damon and Krystal must work together to stop evil and destroy years of illegal research.

Hi all! And thanks Anna for letting me pop in today! For those who thought they missed Sunday, there was a little error in timing on MY part, and the blog never happened, so what you are reading today was planned for then.

For those just joining us, for my blog tour, I'm creating something very special. A free read. And you get to help! Each blog posting will be a new scene or chapter of the book titled above, He's no Faery Prince. Previous chapters can be found on my FREEBIE READS page of my blog. Then, at the end of my post for today, you'll see some questions. They are designed to make life easier for me (or much more fun, at least) because the answers to those questions will determine the course of the story. Also, if you happen to think of something really awesome to add, not addressed by my questions, feel free to throw that in there too. I'll be sure to take a look at it.

So, without further ado, let's get on with our story.

Ted tried to hide the grin developing on his face, but he wasn't very successful. He glanced at the woman at his side, who snarled in return.

"You like me." He tried to not to feel smug. Hell, he should be waiting for the massive explosion of anger, but he couldn't help himself.

He held up their still joined hands as proof. She jerked her hand away and stalked ahead of him. "That just means I had to put on a good front. You'd know if you understood shifters."

"Ahh, but I do know." He nodded toward the alpha. "He favors you. No other female could ever do what you did back there unless the Alpha thought very highly of her."

"He's my half brother, of course he does." Sasha got into Ted's Patrol car without another word and slammed the door shut, snapping closed the seat belt and folding her arms. Then again, his name wasn't even Ted. What else had he lied to her about?

After he finished buckling up and starting the engine, she glared at him. "You lied to me."

"Not technically. Ted is my nickname. Just because it has another connotation doesn't mean it's not what I use. And besides, I don't want everyone to know I'm Fae royalty. It's a pain in the ass, and people think you can do something for them, so they don't act like themselves. I happen to want people to like me for myself."

Sasha pondered his words. "Well, I never said I liked you, but at least I understand your reasons. But you could have said something before embarrassing me in front of my entire pack! And how is you already know where my brother is?"

"I didn't say I knew where he was right this moment. I said, I know who took him captive."

"And you said you knew the GSA is involved. Isn't that just a little coincidental that the same group who took your friend also took Damon? I know how the Fae work. You aren't interested in helping others. The fae in general are selfish pranksters. Hell, I don't even know how old you are."

He cursed and pulled the car to the side of the road, putting it in park. He gave her his full attention, and what attention it was. Without the magic to hide his ears, she could see their points reddened in his anger. And his eyes. Damn, if his eyes didn't steal her breath away. The scent of anger burned hot in the car, and for a moment, she could almost see him as a shifter. Hot, powerful, masculine, ready to fight for what he believed. Up to now she'd seen his charming side. The Fae were known for their charm. But she'd never heard anything about this sudden hot aggression she saw now. She kind of liked it.

"Think about it, Sasha. The GSA pretends to supervise the paranormal community that the rest of the world doesn't even know exists. There's nobody to stop them. Nobody to monitor to make sure they aren't up to something. Tamed came to town in search of the Phouka, it's true. But he got a message to me, said the GSA was doing experiments. On shifters. Now if you don't care about whoever they're playing God with, feel free to get out now, go back to your pack, and let them deal with it. Or, you can stay with me, and we'll find out what's happening. It's your choice."

The spark of emotion in his green eyes did something to her. It made her worry for his friend. If Tamed was at the same place Damon was, then maybe it would be good for the two of them to work together. "How old are you?" The question leapt from her lips before she realized she'd even thought of it.

Ted jolted back a bit, his eyes widening. "How old am I? That has no bearing." He shook his head. "but since you asked, I'm two hundred and fifty."

"No, decades. Of course years." He started the car again and pulled onto the road. "What, you think the Fae live forever? We live longer than most of the races, but not as long as many think."

She shrugged. "I guess that means your mate is your age as well?"

He stared out the windshield and for a moment she thought he wouldn't answer. "When I chose a mate," he said, his voice steady, but soft, "She will have the privilege or curse, depending on how she looks at it, to sit at my side on the Fae council. If she's Fae, she'll naturally live the same length of time as I do. If she's human, or other," he said, glancing at her, "She'll have the luxury of Fae magick to keep her young."

So he wasn't mated. Sasha tried to ignore the spike in her pulse at the information. The car slowed and he turned to face her, his eyes dark, and held an almost hungry look. No, she had to be imagining it.

"So what's our next step." Because if she didn't change the subject, she was going to get into territory she didn't need to be in. With a Fae, no less.

"Are you good at video games?"

Sasha stepped up to the counter of the gaming shop. "I need to use one of the computers."

The geek at the front desk glanced around at the available machines. Gamers came to places like this because the systems were usually top notch. The average person couldn't afford the computers most often needed for the top games. That, and World of Warcraft, one of the most popular online games, was as much fun in a group as it was alone. There were entire communities, both online and at gaming centers like this, which thrived because of a single game. And it was one she'd played frequently, so when Ted told her the GSA had a communications center beneath the gaming center, she'd volunteered to come play. With her skills as a shifter, she could sense when non-humans entered, and she could watch to see what happened.

Plus, she'd bet the gaming center was a great recruiting spot for the GSA. So many young kids, with drive and excitement, all ready to fight their first battle. All in one place. She'd bet none of them knew they were taking it real just beneath their feet.

"We're all booked up at the moment," the kid said.

Sasha arched a brow, noting the machines sitting empty, scattered about the room. "Doesn't look that way to me."

The kid glanced back to the main office then back to her. He shrugged. She knew he was covering his butt. "Oh, I get it," she said, loud enough for everyone to hear. "You don't think a woman can play Warcraft, so you don't let them waste time on your precious computer systems. Look buster, rent me a machine and get out of my way or I can kick your ass seven ways till Sunday."

The kid paled, and a man stepped from the office. He wore a company golf style shirt with a collar and a nice pair of jeans. He was no more than 25, but he was definitely in shape. She sniffed. For a human.

"Yes, your sales clerk told me there are no machines for rent. I see an awful lot of empty hardware sitting there. So rent me a computer."

The man smiled, but his eyes narrowed, looking her over.

Ok ladies and gentlemen. There you have it.

Time for the questions. Just so you know, I went back and found an error in the story. I'll be fixing it on my website, but I see Sasha figured out he was Fae before Christmas, and then I forgot that little fact. So take a peek at the main story website linked above to see any changes.

So now for the big question: Is this man going to offer her a computer? Or a job? Give details!

And second, how is Ted keeping tabs on her? He's never going to let her go in there alone, is he? Does he use a radio transmitter? Or is he already there, playing a game? Or is he out in the car, hanging around to see what happens?

Or if you have additional suggestions, feel free to add those as well in the comments section.

There are two ways to enter:

So follow along, ladies and gentlemen, to help me write a short story, and to enter for the prizes!

Again, the entire blog schedule is found on my blog in the calendar, which will include links to each blog participating!

The next stop on the blog tour is with Novel Thoughts on 14 January, so don’t miss it!

Within every breed of creature lies a subspecies where evolution took an odd turn. In the darkness hides a world where animal and man are one.

Man and Beast.
Beast and Man.

Together, their hearts reign.

An unknown war has been fought in the city streets, and Man is no longer the strongest predator.