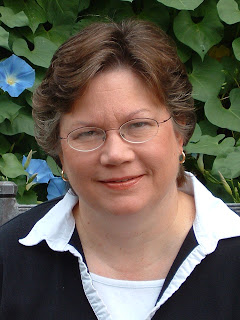 Today my guest is Cheryl Brooks, author of the Cat Star Chronicles. Hi Cheryl, Welcome to Anna's Book Blog! Thanks for stopping by, it's a pleasure to have you here.

Thanks for having me here, Anna!

To start off can you tell the readers a little about yourself?

I'm the very last person you would look at and suspect of being a romance writer. I've been a night-shift critical care nurse for thirty years, and I look like one. I can talk with my patients about anything, but am pretty quiet around strangers in any other setting. I've been a horse lover all my life, and currently own four of them, but I don't ride nearly as much as I did before becoming a published author. Writing is one of those things that can eat up your spare time like nothing else. The good thing is that you can do it no matter what the weather is like. I enjoy cooking and gardening and I've played guitar since the age of ten. I've been married to a great guy for thirty years and have two wonderful sons.

Fugitive is your newest release, Can you tell us a little about it and the series?

The series is set a thousand years in the future. Space travel is commonplace and though we have explored much of our galaxy, there are still unknowns. My heroes are survivors of the war which destroyed their homeworld, a remote planet called Zetith, whose natives are a highly attractive and long-lived species of humanoids with feline traits. Captured near the end of the conflict, the men were slated to be executed, but were sold as slaves, instead. As if that weren't bad enough, there is a bounty on the survivors which makes their continued survival somewhat tenuous. No one is certain at this point in the series, but it is suspected that the world was targeted due to the drug-like nature of Zetithian semen and the remarkable sexual prowess of the males.

Fugitive is the story of Manx, a Zetithian who escaped from slavery and has been on the run for the past twenty-five years. His skills in stealth and concealment have enabled him to elude the Nedwut bounty hunters hunters thus far, but Drusilla, a lovely wildlife artist, makes him throw caution to the wind.

It varies. I squeeze in writing around my schedule at the hospital, and have little time for much else. For example, I was supposed to be working tonight, but was put on call due to low census in the ICU, so I'm taking advantage of the extra time to get caught up on the guest blogs for Fugitive's promotional tour. However, on a day that I have off, I turn on my computer as soon as I get out of bed, and begin by answering emails and reading and commenting on various blog posts. Then I have breakfast and feed the horses and clean the barn. After that, I write the blogs I need for the next few days, which usually takes me until lunchtime. Then I work on my current work in progress the rest of the day, checking blogs and emails when I need a break and taking a couple of hours out to feed the horses again and fix dinner. After that, I'm usually on my computer until 11pm and then I get ready for bed and check my personal blog at midnight to make sure it posted correctly. Needless to say, by the end of the day, I have a little trouble standing up straight!

When did you realize you wanted to be a writer?

I began writing about thirty years ago when I decided that what the world needed was a sizzling hot science fiction romance. I'd never read one, and I was tired of reading about doctors, lawyers, and millionaire heroes and wanted something different. It took me several starts and stops to get there, and I wrote several other books—mostly contemporary romances—before finally writing Slave, which turned out to be the first book in the Cat Star Chronicles series.

When you're not writing what kind of books do you like to read?

I've read all of Georgette Heyer's Regency romances, and I've always been a fan of Mary Stewart's romantic suspense novels. More recently, I fell in love with Harry Potter—just like millions of other readers. I have also read many of the books of my fellow Sourcebooks Casablanca authors, as well as those of my chapter sisters in the Indiana RWA. For me to go browsing in a bookstore and pick up a book to read just for pleasure doesn't happen very often anymore. I simply don't have the time!

Do you see the Cat Star Chronicles having an end or do you feel it's an open-ended series?

It was originally supposed to end with the sixth book, but I was asked to continue the series to nine books, therefore the story arc had to change to include more characters, so, at present, it's very open-ended. With the offspring of the various couples in the series as a springboard, it could continue on indefinitely, depending on the demand.

Out of all your Cat Star men, do you have a favorite?

My favorite is usually the one I'm writing about at the time. I fall in love with each of them in turn, and then move on to the next. However, I suppose Cat, the hero of the first book, will always be my favorite because he was the inspiration for the others.

Are there any real life people that have inspired the characters in your series?

Yes. Many of my characters are composites of different actors, characters, or people I've actually met. Most of the time, a reader would not recognize who the character was based on, and other times, they easier to see. In the beginning, Manx, the hero in Fugitive, was loosely based on actor Jeff Goldblum, but I doubt if anyone reading the book would realize that. However, Jacinth, the heroine in Slave, has a healthy dose of Han Solo in her, which some readers have noted.

A hero, a heroine, and a basic plot. I make up the rest of it as I go along. If I'm too precise in the synopsis of a new story, it limits where I can go with it, but, fortunately, I'm not a slave to that original. Before becoming published and having an editor who wants to know in advance what the story will be about, I never wrote a synopsis prior to writing the book. I would have an idea in my head, and maybe write a few notes, but mostly I would start with page one and write it through to the end. Sometimes I jump ahead if I get an idea for a particular scene, but it's much more difficult to blend the parts together if I do that.

What is up next? If you can tell us a little about your next project?

Hero, the sixth book in the series has already been revised and sent to the copy editor, and I'm currently working on book seven, Renegade, which is about Dax, a Zetithian man who has been uninterested in women until meeting Ava, a human/aquatic alien hybrid who is determined to return to her former lover. She's a passenger aboard his ship, so there is plenty of opportunity for them to get acquainted, but Dax is not only a virgin, he is completely clueless when it comes to the rules of romance. In desperation, he seeks the advice of a friend who is a notorious ladies man, but will he help Dax, or steal Ava right out of his arms?

I'm always looking for new ideas, so if anyone has any to offer, I'd love to hear them! 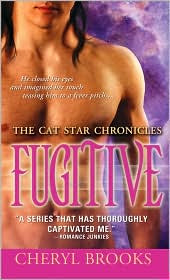 FUGITIVE BY CHERYL BROOKS—
IN STORES JANUARY 2010
When a Zetithian fugitive meets a beautiful Earth woman, their passion may cost them both their lives...

Manx is a Zetithian fugitive with a feline gene that gives him remarkable sexual powers. He has been in hiding in the remote jungles of Barada Seven ever since being marked for extermination by the violent Nedwuts.

Artist Drusilla arrives on Barada Seven, enticed only by the promise of finding a nature paradise there. But she discovers a wildlife she wasn’t expecting when she encounters Manx. Reckless with desire for the beautiful Earth woman, Manx risks his life to win her as his mate.

It’s only a matter of time until the Nedwuts find them, but it will take all of Manx and Drusilla’s passion, skill, and ingenuity to survive.

About the Author
Cheryl Brooks is an Intensive Care Unit nurse by night and a romance writer by day. Previous books in The Cat Star Chronicles series include Slave, Warrior, Rogue and Outcast. Hero, book six, will be in stores August 2010. She is a member of the RWA and lives with her husband and sons in Bloomfield, Indiana. For more information, please visit: http://cherylbrooksonline.com/

Thanks to Sourcebooks I have two copies of Fugitive to giveaway. Open to U.S. & Canada. To enter leave a comment along with and email address. The winners will be announced on January 19th. Good Luck!!
at 12:09 AM