Out Now! Historical Romance, Forever Yours by MJ Smith 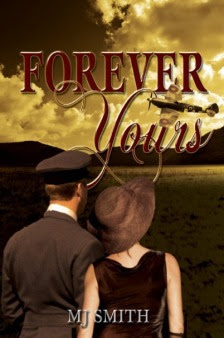 M.J. Smith’s Forever Yours is a remarkable debut novel encompassing the lives of two people during World War II.

Liz, a pilot in the Royal Air Force, answers the call of duty for her country.

Philip, her childhood friend and superior, is in the position to stop Liz from going into active combat, but Liz is determined to fight for country, despite Philips’s reservations.

Before Liz leaves on a dangerous reconnaissance mission, the two share a passionate night and Philip proposes, giving Liz his grandmother’s ring. But fate has other plans for these two and Liz’s plane goes down. The enemy captures her and Philip has no way of knowing whether she is dead or alive.

During her capture, Liz meets and falls in love with another. Meanwhile, Philip joins an elite group of paratroopers and meets another woman.

Two loves lose each other. From time to time, each wonders what may have been. Will Liz and Philip ever see each other again? Will the war that tore them apart destroy the greatest love each has ever known?

Smith’s characters come to life in this perfectly constructed novel. An engrossing and sweeping saga, Forever Yours expertly captures the mood of war-torn Europe and the people who lived through its horrors and its bittersweet reunions.

Where to Buy:
Amazon
Barnes and Noble
Eloquent Books


Excerpt from Forever Yours:

Liz was happy and grateful for this moment with Philip. Laying her head against his chest, she felt so warm and secure in his arms. All her memories of the times spent with him flowed back. She held back the tears threatening to leave her eyes.

“Are you warmer?” Philip asked, not letting her go.

She nodded, tensing, awaiting his kiss without realizing she lifted her face in invitation.

“I've missed you so much, Liz.” The words were little more than a whisper.

Disappointment washed over her as he kissed her brow then stepped back. “I've missed you too Philip.” She looked into his heavenly blue eyes.

“I’m surprised seeing you here of all places.” He smiled, taking her hand and sat on the bench a few feet away. No one saw them.

Indeed, she felt as though they were the only two people in the world. She felt her heart race when his warm muscular thigh brushed against hers. And he held her hand in his large one. She stared at their joined hands. Never did she feel so nervous with Philip. All this was very unknown and frightening. “Do you think we'll be fighting soon?” She asked, changing her train of thought.

“Soon. With the battle in the Atlantic, they need more ready pilots.” He held her hand in his and looked at her with serious eyes as she remained silent. “Liz. Promise me you'll be careful when it’s time for you to on missions. I know I can't stop you, so promise me you'll take care.” Philip's tone was firm but soft.

She nodded without taking her eyes away from his. “I promise. And you do the same.” She was so afraid to lose him.

Philip nodded as they sat in silence a little while longer. She wished so much Philip kissed her. But he didn’t. He held her in silence. And he never said how much he missed her. It was for the best he said nothing. If he told her how he missed her or loved her, she may fall into his arms and forget her dreams. And she wasn’t ready to sacrifice her chance in the Royal Air Force for more than friendship with Philip. Or was she?

She lifted her head and his eyes met hers. He stared into her eyes for a long while. And she felt herself melt on the spot. What was wrong with her? She stared at his tempting lips and wished he would kiss her. Instead, she felt his hand cup her cheek and his thumb traced her lower lip, leaving a trail of heat. He didn’t kiss her but the intimate gesture sent waves of warm sensations all over her body. His eyes stared into hers with intensity. And her heart drummed in her ears. Anticipation alerted all her senses. “Liz.” The low rasp in his voice sent another wave of sensations through her body. She bit her lower lip and closed her eyes for a quick moment.

Philip sat so close; she could feel his hot breath caressing her cheeks. Her heart jumped in her chest when his lips touched her cheek and the delicate skin near her ear. “Liz,” he whispered again in her ear. A new sensation centered in the special place in her lower belly. She saw stars behind her eyelids and waited for Philip’s next move. Will he kiss her? She didn’t know. His hands kept her warm against the cool air. Indeed, she felt a bit over warm and unsure of her body. Philip never touched her in such an intimate way before. His lips lingered near her ear. And his hot breath sent shivers along her skin. She turned her head ever so slowly and met his eyes. She could see his eyes darken. He cupped her cheeks and leaned his forehead against hers. Their lips brushed together. Voices in the background brought them back to earth. Philip broke his embrace, leaving Liz breathless.

Quickly, she regained her composure before someone saw them together. She glanced at Philip and his face didn’t show any trace of emotion. “I should go,” she said, swallowing hard against the lump in her throat. Tears threatened to leave her eyes. Before he said a word, Liz removed Philip’s jacket from her shoulders and walked toward the camp.
at 12:04 AM