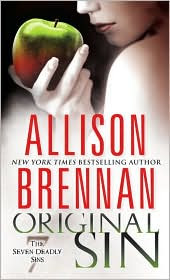 I received this book for review from Meryl L. Moss Media Relations.

Summary: Haunted by chilling memories of demonic possession and murder, Moira O'Donnell has spent seven years hunting down her mother, Fiona, whose command of black magic has granted her unprecedented control of the underworld. Now Moira's global search has led her to a small California town that's about to become hell on earth.

Tormented by his own terrifying past and driven by powers he can't explain, ex-seminarian Rafe Cooper joins Moira's dangerous quest. But Fiona is one devilish step ahead. Hungry for greater power, eternal youth, and stunning beauty, the sorceress is unleashing upon the mortal world the living incarnations of the Seven Deadly Sins.

Together with a demonologist, a tough female sheriff, and a pair of star-crossed teenagers, Moira and Rafe are humanity's last chance to snatch salvation from the howling jaws of damnation.

Thoughts: Original Sin was a smooth read. Not bogged down by unnecessary description. It was a fast, intriguing read full of suspense and danger. A spellbinding novel of good vs. evil. I definitely recommended checking this book out.

Allison Brennan is an author I don't usually read, mainly because I'm not a big fan of romantic suspense. But her latest book, Original Sin caught my eye. It was a delight to read, I'm glad I got the chance to read it. The author weaves the paranormal and suspense brilliantly. Ms. Brennan is certainly a mistress of suspense. There were a few times that I found myself on the edge of my seat.

The publisher has this labeled as a Paranormal Romance, to me it seemed more of an Urban Fantasy. But I think fans of both genres will enjoy this book.