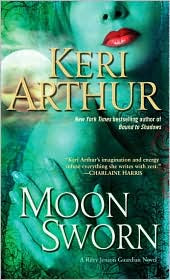 I received this book from review from Random House.

Shape-shifting werewolf and vampire Riley Jenson is through with death–causing it, solving it, surviving it. Her soul mate, Kye Murphy, is dead–and at Riley’s own hands. Not even the seductive embrace of her vampire lover, Quinn, can fully ease her mind, for she has begun questioning everything that makes her Riley–including her job at the Directorate.

Now, the ritualistically slain bodies of ex-cons have started turning up. Reluctantly, Riley takes the case, but something even worse is waiting in the wings. For a vicious enemy from her past is determined to strip Riley of everything that gives her life any meaning: her lover, her brother–and even her own identity. Can Riley survive this ultimate assault? All she knows is, she must fight one last time to find answers, before everything goes dark forever…

Thoughts: Riley Jenson is a very strong person both body and soul. But the recent events in her life have shaken her and she is beginning to doubt everything and knows things have got to change. She takes a new case to work on even though she is sick of killing. This time its very important that she keep her wits about her, an old enemy has come back and she's in more danger than she imagined.

This is the 9th and last book of the Riley Jenson series. This is one of my favorite series so I'm sad to see it end, but very satisfied with the way things ended. Riley hasn't had a lot of happy, so If anyone deserves a little happiness it's her. I loved this story, it was a great way to end the series. Moon Sworn was a fast paced emotional ride to fill the senses. Darkly intense, suspenseful and as always very sexy.