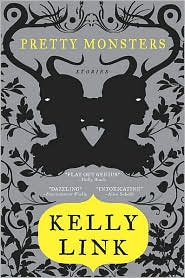 I'm excited to welcome Kelly Link, author of Pretty Monsters (out today in paperback) to the blog. She's here today with some advice that writers will find useful.


This is going to be a post mostly for writers, and mostly for younger writers/writers at a certain stage of their career. I know some writers don’t like to read in their genre -- or at all -- while they’re working. There are good reasons for that: fear of taking on someone else’s voice, or even just the fear that knowing someone else has been working with the same material or in the same territory will prove dispiriting. Sometimes writers decide to read only books available during the time period that they’re writing about, or only other books about that time period. Here are some other ways to read like a writer:

1. Read widely. Don’t just read in the genre you want to work in. Everyone turns up their nose at some genre, but writers really ought not to do this, at least not until they’ve sold at least a couple of novels. Don’t like realistic fiction? Read Jane Hamilton’s Disobedience, or Richard Russo’s Straight Man. Never read a romance novel? Try Laura Kinsale, or Eva Ibbotson, or Dodie Smith’s I Capture the Castle. Sneer at science fiction? Try Lois McMaster Bujold, or M. T. Anderson’s Feed. Don’t like short stories? Try Margo Lanagan or Joe Hill, Grace Paley or Lorrie Moore. Don’t like Westerns? Try one of Molly Gloss’s books: I’d recommend starting with The Hearts of Horses. Read poetry, too. The Rattle Bag is a good starting place, but there’s plenty of interesting contemporary work out there -- pick up a year’s best anthology, and figure out what kind of work you respond to.

Here’s why you should do this. Every genre has its strengths and weaknesses, different tools, different ways of hooking its audience. If you’re going to be a writer, you need all the tools you can get.

2. Read nonfiction. I’m a fan of David Quammen’s books, and Jeffrey Steingarten’s The Man Who Ate Everything. Julie Phillip’s biography James Tiptree, Jr: The Double Life of Alice B. Sheldon is also a page-turner. Plus, it’s about a writer. Paul Barber’s Vampires, Burial, and Death: Folklore and Reality is terrific, even if you’re sick of vampires. Especially if you’re sick of vampires?

Why? Because as a writer, you get told all the time not to infodump, and yet exposition can be an elegant and economic way of slowing down the narrative, when you want to slow it down. It can be a way to shift the reader’s focus, or distract them from a bit of sleight of hand. Learn about how to handle exposition by reading nonfiction. As a bonus, you’ll be better at worldbuilding, and a better cook, too.

3. Don’t be embarrassed by the books that you love. Who cares if someone gives you an odd look when they catch you reading YA, or romance, or SF on the subway? If you’re a writer, your business is books. You have permission to read whatever you want to read, and if you do love a genre that doesn’t get much respect, then stand up for it. Figure out what it does that you respond to as a reader, because it’s probably something that you’ll want to try to do.

4. Read classics as well as contemporary novels. Mary Elizabeth Braddon is swell, and so are many of the classic English ghost story writers. There are a ton of excellent older young adult books, like T. H. White’s Mistress Masham’s Repose, as well as Joan Aiken’s Dido Twite series.

5. If you can, join a workshop at some point so you can read work in progress. I’m the product of an MFA program, and of the Clarion Workshop, which is a six-week workshop for writers of science fiction and fantasy. I love workshops. It’s a gift to be told how other writers read your work, but it’s even more of a gift to have the chance to think about how other people approach their stories. The more effort you put into reading someone else’s short fiction, the more you bring back to your own fiction the next time you sit down to write.

7. Realize that the things you most dislike in someone else’s fiction are likely to be things that you do in your own writing -- your own areas of weakness as a writer. This is true in workshop, and it’s also true for published fiction. Hate something with a burning passion? Why would you be so worked up if you weren’t afraid – even subconsciously -- that you might be doing it too?

8. Learn to read other writers sympathetically. What are they trying to achieve? What is the book (or story) that they wanted the reader to encounter? If they haven’t succeeded, why not? If a book doesn’t work for you, then does it work for other readers? If so, why? (Be generous here, too, when thinking about why a book has a large audience. Don’t assign the worst possible reasons. Have respect for other readers.)

9. Read awful books. No, seriously. Read them out loud, with friends, if you can. Identify the ways in which you can learn from them. My favorite awful book? Micah by Laurel K. Hamilton (I am not going to say that her other books are awful, by the way. But this one is astonishingly -- and usefully – and wonderfully -- horrible. I highly recommend it.)

10. Learn to read other kinds of narrative. Think about narrative when you’re watching television, or a movie. Apply all of the rules above. Read comic books. Read Scott McCloud’s Understanding Comics and Lynda Barry’s What It Is. Read Bryan Lee O’Malley’s Scott Pilgrim series. Learn how to read advertisements -- what they want to accomplish, and how. Learn to read other people -- your friends, your family,your coworkers. Think about how they present themselves, their patterns of speech, the stories they tell about themselves. Again, be sympathetic here. Everybody is the hero of their own story. Be observant, not a sociopath.

11. Learn to read like an editor. Reading slush was one of the best things I’ve ever done as a writer. You may or may not be able to volunteer for a publisher. If you can’t, then pick up a book or a magazine, and start reading. Forget that rule above, about reading sympathetically. Instead, pinpoint the sentence, or the paragraph where you want to stop reading, and why. Eventually you should be able to do this within the first two paragraphs. Now go back and do the same thing with your own fiction. You can do the same thing with a successful piece of writing. Identify that moment where you fall into the narrative. And as you continue to read, look for those places where you drift, those places where you are riveted again.

12. Take a short story or a novel that you love, and type it out a few pages at a time before you start your own writing. This is a way of reading more slowly. It helps me think about the decisions that the author has made -- about structure, characterization, language, etc.

13. Read a piece of fiction that you’re proud of, out loud. Preferably to an audience. But don’t read for too long -- fifteen to twenty minutes is probably long enough. If you have to stop to explain something, you’re probably not reading the right section. Learn to read the audience as well -- are there places where they are particularly engaged? Where they seem to disengage? Try reading someone else’s work out loud.

14. Every once in a while read a book out of order. Read the beginning, then the ending, then dip around in the middle. I do this all the time, especially with mystery novels. If the book is a good book, it shouldn’t matter if you know what’s going to happen. In fact, if you know what’s going to happen, you’re better able to see how the writer set up their narrative, their ending, so that you can learn from their strategies.

15. If you love a particular author’s work, and you want to be able to do what they do in their fiction, read the authors that they claim as inspiration, the work that they are indebted to. Trace that genealogical line.

One last rule: If you’re a short-story writer, subscribe to at least three magazines each year. Subscribe to ones that you would want your work to appear in. If there aren’t any magazines that you’d want to be published in, then don’t write short stories. Bonus points if you subscribe to a magazine that isn’t quite in the genre that you work in. Poetry Magazine is swell. The Magazine of Fantasy and Science Fiction publishes writers like Carol Emshwiller and Rick Bowes. There are many excellent zines. One Story is terrific. So are VQR, Tin House, and Conjunctions. Right now my favorite online magazine is Strange Horizons, and guess what? It’s free.