[Review & Giveaway] - Those Who Fight Monsters 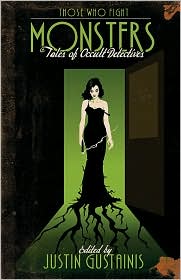 Summary:  Got Vampires? Ghosts? Monsters? We Can help!

Those Who Fight Monsters: Tales of Occult Detectives, is your one-stop-shop for Urban Fantasy’s finest anthology of the supernatural. 14 sleuths are gathered together for the first time in all-original tales of unusual cases which require services that go far beyond mere deduction!

Those Who Fight Monsters: Tales of Occult Detectives brings together popular characters from many Urban Fantasy paranormal investigative series, for your enjoyment.


Cassiel
from Rachel Caine’s Outcast Season series.
Thoughts: Those Who Fight Monsters is dark and fresh. Essentially an Urban Fantasy delight. Fans of this genre will be itching to get their hands on this book. I loved it. I got to visit favorites such has Quincey Morris, Tony Giodone & Pete Caldecott.  But also introduced to others such as Marla Mason, Jill Kismet and many more.

My favorite stories from this anthology are:  Little Better Than A Beast by T.A. Pratt, Deal Breaker by Justin Gustainis & Running Wild by Rachel Caine.