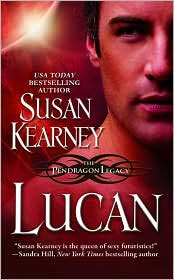 Summary: THEIR LOVE IS FORBIDDEN
Healer and high priestess of her people, Lady Cael is fated to life without a mate. But a mysterious explorer named Lucan Rourke doesn’t know her secrets, and his touch makes her crave a future that her extraordinary birthright has forbidden her...

BUT DANGER IS NO MATCH FOR DESIRE
Lucan has just one mission on Pendragon: to find the mythical Holy Grail, Earth’s only hope for survival. His powerful attraction to Cael is a distraction he can’t afford, unless he convinces her to join forces with him. Yet working so closely together only heightens their passion...even when the terrifying truth of Cael’s heritage threatens to shatter Lucan’s every belief—and the galaxy itself.

Thoughts: Lucan & Cael both work in the same lab on Pendragon & are instantly attracted to one another. Both their worlds, Earth and Pendragon are in desperate situations. The one thing both of their worlds need is the Holy Grail. It could also be the one thing that could tear them apart.

Lucan is a non-stop, entertaining read. Filled with adventure and steamy scenes. Lucan and Cael sizzle. Ms. Kearney has done a wonderful job creating this new world. My favorite part of the story has been the dragon element. I think fans of the King Arthur legends will enjoy this new twist. This was my first time reading Susan Kearney's work, and I have to say I really enjoyed it.

Make sure to stop back on September 20th, I'll be giving away 5 copies of Lucan!