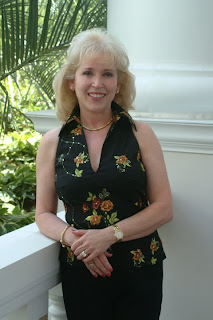 Today I have Amelia Grey, author of The Rogues' Dynasty series here, Welcome to Anna's Book Blog! Glad to have you here. To start off can you tell the readers a little about yourself?

Thank you, Anna, I’m happy to be here today on your fabulous site, and delighted to tell you a little about myself. I’ve been writing for several years now and have published books under two other names. For the past eight years I’ve been writing Regency historical as Amelia Grey, and I am having so much fun writing books as Amelia! I am absolutely fascinated by the Regency time period and all its trappings. I’m excited to get up in the mornings and get to the computer. I absolutely love being a romance author.

A Marquis To Marry is your newest release so can you tell us a little about it and the series?

I would love to tell you a little about A Marquis To Marry which is the second book in The Rogues’ Dynasty Series. It’s an October release and is currently on sale wherever books are sold. In A Marquis To Marry, the hero is a fun-loving rogue and very happily a bachelor, so I decided I had to give him a beautiful, fascinating woman who had the power, charm, and wit to make him want to settle down to just one lady. For enjoyment and fun, I had him in possession of a priceless necklace of pearls that belonged to her family, and then for intrigue I had them stolen.

The first book of The Rogues’ Dynasty series is A Duke To Die For. It came out in April 2009, but it is still available at your favorite local or online bookstore. In A Duke To Die For, the hero’s life is chaotic and undisciplined, so I gave him a young and innocent heroine who was timely and organized to get under his skin and stay there. For fun I had her believe she was cursed, and for intrigue I had him be in danger because of it.

An Earl to Enchant is the third book of the series and will be published in April 2010. In An Earl To Enchant, the hero is a planner who plays by the rules and has no idea what to do with an enchanting heroine who ignores convention and steals his heart with her impulsive ways. For merriment, I have the heroine pursuing the hero, and for intrigue I have a killer pursuing her.

When did you start writing? How did you decide what to write, did you have a moment where you said "yep Historical Romance is for me" Have you ever thought about writing a different genre/ or sub-genre? If so what would it be?

I started writing twenty years ago, and I have to say that I’ve never wanted to write anything else. It’s always been romance for me. There was a time when I tried my hand at contemporary, and I had one book published by Harlequin a few years ago. And then about three or four years ago I tried my hand at a nonfiction book but I decided to put that book away for another time. I’ve published nineteen historical books and one contemporary so I think it’s fair to say that my heart has always been in historical.

When you’re not writing what kind of books do you like to read? Do you have any favorite authors that are must reads?

I do enjoy reading and I read a variety of books. I just finished The Adventure Cookbook about a young lady who went on a six year self-finding journey all over the world and in each place found new recipes that helps her live a healthy life. The book I’m reading now is The Grand Sophy by Georgette Heyer. But I also enjoy inspirational and self help books on how to live life better. Two authors I always read are Sandra Brown and Amanda Quick.

How much research do you put into each book you write? Do you have a process you stick with?

The good thing about writing in one time period such as the Regency for more than one book is that a lot of the research is done before the first book begins. But that said, I assure you that I continue to read about the time period and books set in the Regency period because there is so much to learn. I’m constantly looking for answers to questions and I’m happy to say I have a friend who has published more than twenty Traditional Regencies and she has been an immense help to me. It is easy to get tripped up on words that were not used in the time period or little known historical facts.

Who are some of your favorite historical characters?

I’m going to assume you mean real people. I’m also going to use the word fascinating rather than favorite characters. I’m happy you asked this question because I’ve been watching The Tudors, and I am totally fascinated by Henry VIII. Not as a hero, but as the most spoiled, selfish brat I could ever imagine. I can look at his life and say, “You can’t make this stuff up. No one would believe you.” And then a few years ago I read Son Of The Morning Star by Evan O’Connell. This is an extremely good and detailed account of the Battle of Little Bighorn and a fairly good analysis of General Custer. I just shake my head and say, “What was he thinking?” I’ve also been fascinated after reading books on Benedict Arnold and John Andre as well as Sacagawea, the Indian woman who was a guide for Lewis and Clark. I have loved reading about all these people and way too many more to list here.

How did you come up with the idea for The Rogue Dynasty Series? Did any real life people inspire any of the characters?

I wasn’t inspired by any particular person for any of the characters in The Rogues’ Dynasty. I knew I wanted three handsome, sexy men connected in some way, so I gave them a grandmother who influenced their lives, and the hero in each book deals with his grandmother’s legacy in his own way. I knew I wanted all the heroes to be titled so I had to make the cousins rather than brothers. I had to give each hero different character traits and different human faults, and then I had to give each one a heroine that complimented them.

First I must have my costume book. I often write about how my characters are dressed, and I love to look at pictures and describe the clothing.

Second I must have Webster’s Collegiate Dictionary (mine is the 10th edition) so I can check to see if a word was in use in the Regency. I have to admit that I sometimes I still make mistakes, but usually my editor and or the copy editor will catch it before the book goes to print.

And third I must have water on my desk. Every time I have to stop and think, I take a sip.

What is up next? If you can, tell us a little about your next project.

I have just signed to write three more books in The Rogues’ Dynasty Series! I would love to tell you about my next project, but I can’t say too much about it right now. Not because I want to sound mysterious, but I can’t tell you where the next three rogues are coming from because that would spoil a very important part of the third book in the series which is An Earl To Enchant and will be out April 2010. I do hope you will have me back next April to tell you all about that. And thank you once again for having me here today!

Thanks again Amelia for stopping by. I look forward to having you back again next April when An Earl To Enchant is released. 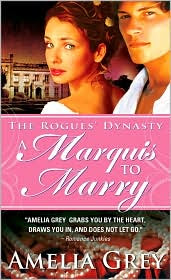 A Marquis to Marry,
Book Two in the Rogues’ Dynasty Trilogy,
In Stores October 2009
Alexander Mitchell Raceworth, the dashing fourth Marquis of Raceworth, is shocked when the alluring young Duchess of Brookfield accuses him of stealing priceless pearls belonging to her family. Susannah Brookfield is the most beautiful, enchanting woman he has ever met, but despite his attraction, he's not about to hand over the pearls.

Though suspicion and mistrust drive them apart when the pearls are stolen, Race suggests they pool their resources to recover them. If they do find them, will they finally be able to give in to love, or will the truth of the elusive necklace tear them apart once and for all?


About the Author
Amelia Grey’s awards include the Booksellers Best and the Aspen Gold, and as Gloria Dale Skinner, the coveted Romantic Times Award for Love and Laughter and the prestigious Maggie Award. Her books have been featured in Doubleday and Rhapsody Book Clubs. Happily married for twenty-five years, she lives in Panama City Beach, Florida. 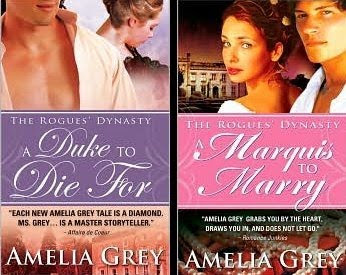 Thanks to Sourcebooks one lucky winner will win both of these books, A Duke to Die For & A Marquis to Marry. To enter leave a comment along with your email address. The winner will be announced on October 19th. Good Luck!!!
at 12:35 AM