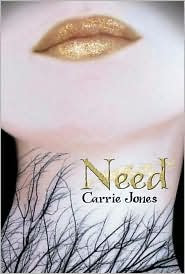 Summary: Zara collects phobias the way other high school girls collect lipsticks. Little wonder, since life’s been pretty rough so far. Her father left, her stepfather just died, and her mother’s pretty much checked out. Now Zara’s living with her grandmother in sleepy, cold Maine so that she stays “safe.” Zara doesn’t think she’s in danger; she thinks her mother can’t deal.

Wrong. Turns out that guy she sees everywhere, the one leaving trails of gold glitter, isn’t a figment of her imagination. He’s a pixie—and not the cute, lovable kind with wings. He’s the kind who has dreadful, uncontrollable needs. And he’s trailing Zara.

Thoughts: Since her stepfather died Zara has pretty much stopped living, so her mom sends her off to Maine to send some time with her grandmother. Hoping this will bring about some change. Once in Maine Zara sense things aren't all what they seem and eventually learns that she is being stalked.

From the get go I was enthralled with this book. Carrie Jones has done a beautiful job with setting up this eerie world and creating intriguing characters. Need draws you in and doesn't let go. Zara is dealing with pixies and not the nice kind you find in Disney movies. I found the stalking scenes to be believable and very creepy. It's been a while since a book spooked me, but I loved it. This story was intense, with both fantasy and romance elements.