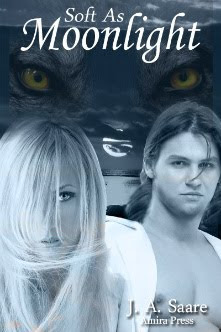 Summary: Lycae Wolfe Trevlian returns to New Orleans after a lengthy self imposed absence with one goal – to appease the vampyren harboring a grudge against his kin so he can leave as soon as possible. Bitter memories linger in the Big Easy, memories best left in the past. Fortunately, the agreement with the vampyren is simple – destroy the creature killing off their brethren, and the death of their Master is forgiven.

Dhampir Arden Moran has waited two decades to avenge the murder of her friend by destroying the vampyren King Lucius Mercoix, and years of dedication and patience are about to pay off. She tracks down the human slave to the King, intending to uncover where Lucius rests. There is just one enormous problem she wasn't prepared for – the breathtakingly gorgeous Lycae sent to intercept her.

One touch is all it takes for Wolfe to ascertain that Arden is his mate, and he vows to kill anyone or anything that attempts to harm the beautiful half-human, half-vampire female. When the vampyren hire assassins to finish the job he didn't complete, he is forced to face and overcome the devastating scars of a past betrayal in order to become an Alpha Lycae strong enough to protect his mate - as well as the pack that needs him.

Thoughts: Lycae Wolfe Trevalian has just arrived to New Orleans after a long absence. he is ordered by the vampyren to kill the gulity party who is killing their people. If he doesn't it will mean war between the Vampyren and Lycae. When Wolfe finds the culpit, Arden Moran he never expects to find his mate.

Soft As Moonlight is interesting and an action packed story. Sexy scenes that will get your heart going. Arden is resistant of Wolfe's claim, cause she is bent on taking revenge on the vamypren who killed her friend. But Wolfe becomes hard to resist with his good looks and sexy charm. A bit more dark than the last story I read by Ms. Saare, but all in all I found both the story and characters entertaining.