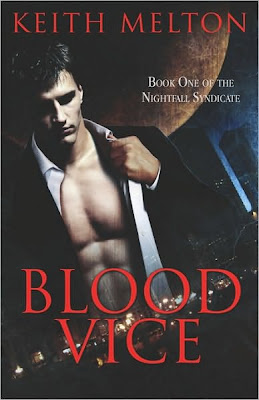 For those who have been wanting to read this book, but aren't really into ebooks, the wait is almost over. Blood Vice comes out in paperback on December 1st!

Business has never been better for hit man Karl Vance. Boston is awash in mafia blood, and Vance has a certain fondness for blood. He’s a master vampire—one of the most powerful of his kind. Having sworn to never again feed on the blood of innocents, Karl preys instead on Boston’s criminal underworld. Which makes him a valuable asset to those who deal in death.

Maria Ricardi intends to use that asset to its full extent in order to gain power within her patriarchal crime family. Vance thinks he’s been hired to keep track of the family’s princess, but she’s got a plan to get her hands dirty and earn the respect she deserves. And she’s not above using their instant attraction to get what she wants.

That driving ambition draws the attention of a rival clan’s newest and most dangerous “consultant.” Alejandro Delgado, Vance’s centuries-old nemesis. Delgado zeroes in on the one chink in Vance’s armor—his fondness for the headstrong Maria.

When she becomes enslaved by Delgado’s unnatural kiss, only one thing is certain. Vance has to decide which he wants more. To settle the score—or rescue her soul.

My review of Blood Vice can be read here
Where to buy:
Amazon
Barnes and Noble
Borders
Overstock
The Book Depository
at 5:58 PM